A change in the CDF represents a valuable opportunity for reorientation 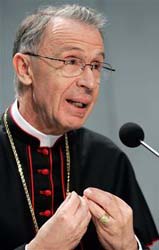 We Are Church International welcome the appointment of Archbishop Luis Ladaria SJ as the new Head of the CDF hoping he will introduce transparency, justice and compassion in the CDF. The decision on a change at the top of the CDF is also seen as progress in reform of the curia. Nevertheless We Are Church International states: “The Vatican curia devotes too much energy to protect and preserve institutional power. This will only change when there is a full blossoming of laypeople and especially women’s involvement in the church and its mission. Substantive change in our Church is urgently needed.” We are Church international calls on the new prefect to rescind all sanctions against theologians as a sign of a new era of justice in the Church and to open and support the vivid exchange on theological positions without ban of thinking.

We Are Church International called for the replacement of Cardinal Müller as the Head of the Congregation for the Doctrine of the Faith (CDF) on 6 March 2017. Cardinal Müller supported the conservative curia who are fighting to retain power and control and are blocking reforms by Pope Francis to make our church more compassionate in the image of Christ.

Sigrid Grabmeier, Chair of We Are Church International, said, “It is logical for Pope Francis not to extend the five-year term of office of Cardinal Gerhard Müller. Cardinal Müller has repeatedly set himself up as a teacher of the Pope through his teachings and interpretations of the Papacy, most recently in his book ‘The Pope’. A change in the CDF also represents a valuable opportunity for reorientation for the important task of the prosecution of sexual violence by priests."

Contact: Sigrid Grabmeier, We Are Church International, This email address is being protected from spambots. You need JavaScript enabled to view it.;