Cardinal Gerhard Müller should be replaced

Cardinal Gerhard Müller should be replaced 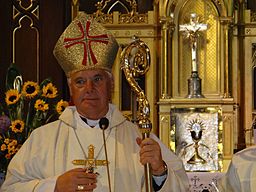 After more than 3 years in office the efforts by Pope Francis to reform the Roman Catholic Church are stalling. The conservative curia are fighting to retain power and control and are blocking reforms by Pope Francis to make our church more compassionate in the image of Christ. The most powerful dicastry in the Vatican is the Congregation for Doctrine and Faith (CDF) with Cardinal Gerhard Müller at its head. The CDF has now been shown to have:

Sigrid Grabmeier, Chair of We Are Church International, said, “The CDF has come to symbolize those aspects of our Church that serve to protect and preserve institutional power, often at the expense of the people of God. Many Catholics see it as perverting rather than exemplifying the Gospel. For the good of our Church, substantive change—a conversion, really—is needed in this important office. And quickly.”

In order to move forward towards a renewed and reformed church We Are Church International call on Pope Francis to replace Cardinal Gerhard Müller with someone who will introduce transparency, justice and compassion in the CDF.

Contact: Marianne Duddy-Burke, Media Coordinator, We Are Church International, This email address is being protected from spambots. You need JavaScript enabled to view it., +1 617 669 7810