Luis García-Huidobro leaves the Jesuits for the "Kume Mogen" 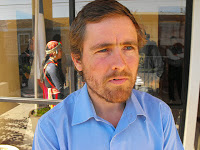 Jesuit brother Luis García-Huidobro, known for his advocacy for Chile's Mapuche people, has left the order. García-Huidobro entered the Society of Jesus in 2000. He was on track to be ordained a priest in 2012. It never happened. Instead, his involvement in direct ministry to and accompaniment of the Mapuche people in their struggles, took the young man further and further away from the official Church.

It didn't begin that way. In his brief autobiography on the Radio Cooperativa blog, to which he has been an occasional contributor since 2011, García-Huidobro describes himself as someone raised with traditional Chilean family values and then introduced to "post-modernity" by his Jesuit high school. He amusingly describes his hobbies as hiking, sports, and washing dishes. He says he was a "conservative student" during his final year of theology, after which he worked in a variety of positions for the order, including youth ministry in San Ignacio parish in Padre Hurtado (Talagante province, Chile), and a couple of stints in Mexico with the Instituto Superior Intercultural Ayuuk in Oaxaca, and with the Servicio Jesuita a Migrantesat the Albergue Guadalupano shelter for migrants in Veracruz. He was looking forward to ordination in 2012, but his work for over a decade with the Mapuche gradually radicalized him and when his fellow seminarians stepped up to receive Holy Orders, García-Huidobro stayed behind, no longer sure that the priesthood as it currently exists in the Church was right for him.

Brother García-Huidobro worked in the Jesuits' Mapuche ministry in Santiago for ten years and then in a variety of local ministries in various Mapuche communities in the Araucanía region. His growing involvement led him to participate along with many other men and women religious in a solidarity fast in support of Mapuche hunger strikers in September 2010.

In 2013, García-Huidobro was arrested along with 15 Mapuche while taking part in a demonstration in support of a Mapuche community leader, Daniel Melinao, who was falsely arrested and charged with participating in the murder of a local police officer. Melinao was subsequently exonerated. García-Huidobro was quickly released but not the other detainees, prompting the Jesuit to accuse law enforcement of racism, saying that he was released because of his last name (which he shares with a number of prominent and wealthy Chileans) and because he was a Jesuit, while the less influential Mapuche were kept in jail. He said he was arrested while trying to stop police from arresting a woman who was marching with her daughter who suffered from Down's syndrome.

Signs of trouble for the young Jesuit were already apparent in early 2013. In an interview he granted to Radio Bio Bio, the bishop of Temuco, Mons. Manuel Camilo Vial talked about the violent confrontations that had been taking place in the Mapuche communities. He reiterated the Church's support for the Mapuche's land rights demands and said that some of the confrontational climate was due to government abuse of the indigenous communities. He praised the Church's role in trying to promote understanding but added that "the opinions of Jesuit Luis García Huidobro are not contributing to the climate of dialogue and peace that the region needs to leave behind the violence" and he announced that he would be speaking with García-Huidobro's superiors.

Evidently the conversation happened because, in an interview he granted to CNN Chile explaining his decision to leave the Jesuits, García-Huidobro said he was told that if he wanted to keep on visiting communities in the Ninth Region (Araucania), he had to get involved in some sort of systemic pastoral work under the bishop of Temuco. This, he said, was the straw that broke the camel's back.

But García-Huidobro did not confine his militancy to the Mapuche. He also advocated publicly for church reform. In 2011, he signed on to an open letter of laymen and women of the Church published on the Iglesia Entre Todos blog that criticized the Church for its attitude towards divorced people and homosexuals and for its monarchical and undemocratic power structure. The letter called for greater involvement of the laity in general and women in particular in Church decision-making bodies.

A month after Bishop Vial's public reprimand, García-Huidobro published his own open letter to Pope Benedict XVI on the occasion of the latter's resignation. After joking that he and his colleagues' preferred candidate for the papacy would be "Sister Lupita...but she's worried that if she leaves there's no one who knows how the kitchen works", he excoriates the former pontiff for his lack of support for liberation theology:

"We miss in this election a dispute at the theological and pastoral level ... Well, our elders tell us it was you who removed from the seminaries, universities, and Catholic publications the theological and pastoral issues that were discussed when you were a theologian. The elders also told us that you would put an end to the most gospel-centered fruit of the Church in recent centuries -- the commitment of the Latin American Church to the liberation of our people, 40% of the world's Catholics. But we don't hold a grudge against you. They say you think you achieved it, you think you have 'restored' the ancient and unchanging Church and that the implementation of Vatican II and liberation theology will not be an issue in the next conclave."

In an eloquent riff on the pope's assertion that he resigned because he lacked the physical and spiritual strength to continue leading the Church, García-Huidobro said that there is no lack of spiritual strength in the Latin American Church and went on to cite numerous examples of ways Catholics are accompanying the poor and marginalized.

"This Church doesn't lack spiritual strength. It's strong but it doesn't make a lot of noise....And I'll tell you something: They go on nourishing their faith with liberation theology which isn't dead. It's out on the town. It's true that it's not taught in the seminaries and universities, but it's whispered in the favelas, in indigenous communities and migrant neighborhoods across the continent. It's spread in blogs where the Inquisition doesn't reach, on Facebook, and community radio stations."

The pope was probably less than favorably impressed by García-Huidobro's closing line: "We salute you, as [Subcomandante] Marcos says, from the far south of Planet Earth."

And so, as García-Huidobro told CNN, he decided to step aside so as not to cause more problems for the Jesuits, against whom he says he has no hard feelings. In a brief message to his supporters posted on his Twitter account and on Reflexión y Liberación, the now ex-Jesuit quotes the rules of the Society that "he who constantly feels conscientious objection to what he is ordered to do should perhaps seek another place in which to serve the Lord." He says that he is leaving with gratitude to the Jesuits who "since my childhood have been my brothers, fathers, and grandfathers, beyond ideological or lifestyle congruencies or differences. All my affection to those who were my family over the years."

García-Huidobro says he wants to go on learning the "Kume Mogen" (Mapuche "Right Livelihood") and that he is "joining the path of many Spanish and Chilean Christians who for centuries have let themselves be conquered and pacified by the good life the Mapuche lead and learning to see the Earth as Mother and not as a silver factory."

Although he denied to CNN that the Church's celibacy rules played any part in his decision to leave, the former Jesuit, who is now living in the Mapuche community in Ercilla, playfully suggests to his supporters that they will soon see him married to a lamgencita (a Mapuche woman) "so that my grandchildren will not end up 100 years from now as usurpers of thousands of hectares and exploiting Mother Earth, like so many thieving wingka (Spanish conquerors and their descendents) who have also come through here."