An Australian Bishop: Dismantle the Pyramid Model of Church 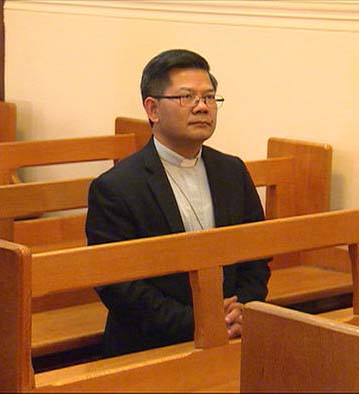 From the statement of Bishop Vincent Long of Parramatta at the Royal Commission into Institutional response to child abuse in Australia.

I see the clericalism as a by-product of a certain model of Church informed or underpinned or sustained by a certain theology. I mean, it’s no secret that we have been operating, at least under the two previous pontificates, from what I’d describe as a perfect society model where there is a neat, almost divinely inspired, pecking order, and that pecking order is heavily tilted towards the ordained. So you have the pope, the cardinals, the bishops, religious, consecrated men and women, and the laity right at the bottom of the pyramid.

I think we need to dismantle that model of Church. If I could use the biblical image of wineskins, it’s old wineskins that are no longer relevant, no longer able to contain the new wine, if you like. I think we really need to examine seriously that kind of model of Church where it promotes the superiority of the ordained and it facilitates that power imbalance between the ordained and the non-ordained, which in turn facilitates that attitude of clericalism, if you like.

I think there’s a link between compulsory or mandatory celibacy and clericalism in that compulsory celibacy is an act of setting apart the ordained. It’s creating that power distance between the ordained and the non-ordained. Insofar as it is an instrument of subjugation or subservience, if you like, of the laity, it is wrong and it has to be reviewed. It has to be looked at, I think, very seriously.

Again, in my culture, my home culture, the parishioners, the faithful, address the priest as “father”, as they do across the world, except that the form of address on the part of the non-ordained is a bit more drastic, in that if you, who are a non-ordained person, address me as a priest, you have to use a certain personal form of address that identifies you as subservient, as a lower-ranking person, like a daughter.
So I would say that in order to dismantle clericalism, we need to look at also the issue of examination and maybe abolition of those honorific titles, privileges and institutional dynamics, if you like, that breed clerical superiority and elitism.

People still address me, especially the faithful Catholics, as “Your Lordship”, and I sort of cringe at that. Or when they come to see me, or they come to meet me, they kiss my ring. I’m not very comfortable with those sorts of practices because they encourage a certain infantilisation of the laity and that creation of the power distance between the ordained and the non-ordained, and I think we have to look at these things seriously.