Is Pope Francis Really Serious About Reforming the Curia? The Example of the Pontifical Council for the Laity

Canberra, 13 February 2014: While the structure of the Roman Curia needs a drastic overhaul, the real test of Pope Francis’ attempts to reform the Roman Curia will be in the personnel he appoints. While there have been some decisive moves – such as the removal of Cardinal Raymond Burke from the important Congregation of Bishops – other Pope Francis appointments don’t inspire a great deal of confidence in those of us concerned about a recovery of an inclusive and genuine Vatican II vision of the Church.

For instance on 6 February 2014 the Holy See Press Office announced that the Pope had confirmed the appointment of members and consulters to the Pontifical Council for the Laity (PCL). The PCL is an important body, especially in light of the fact that it will have considerable influence on the forthcoming World Synod on the Family and Evangelization in October 2014 and 2015. The ecclesiological style and pastoral experience of the laity appointed the PCL will have a real impact on the Synod’s deliberations, either by being appointed themselves to the Synod, or through making sure that people of similar theological views are appointed lay members or advisers. So it is important to see precisely who has been appointed to the PCL. Frankly the recent appointments give me no confidence that anyone who shares a genuinely open, Vatican II ecclesiology has any chance of being appointed to the Synod, let alone to other curial bodies. It is clear that in the present Curia only lay people of a peculiar ecclesiology and pastoral style have any chance of being appointed to any official Vatican body.

Firstly it was announced that Pope Francis had confirmed Polish Cardinal Stanislaw Rylko and German Bishop Josef Clemens (a former private secretary to Joseph Ratzinger when he was prefect of the Congregation for the Doctrine of the Faith) as President and Secretary respectively of the PCL. Both of these men are survivors from the Wojtyla and Ratzinger papacies with the hidebound hierarchical ecclesiological attitudes typical of that period. Both were originally appointed to the PCL in late-2003. There is also an under-secretary, a bureau chief and the head of the youth section who are all priests. There are sixteen lay staff, most of them Italians. Only one lay member of staff, Dr Elizabeth Hawkins, is a natural English speaker. Hawkins is from the Youth Section and is a key planning person in organizing World Youth Days. The head of the Women’s Section is Ana Cristina Villa Betancourt from Colombia.

Francis also appointed new members and consulters for the PCL. Members are like a board of trustees or the board of a corporation and it is they who technically constitute the council rather than the staff. However, because they are there all the time, it is the clerical staff in the secretariat that really controls the PCL. In addition to Rylko and Clemens, twelve cardinals and two archbishops were appointed members, a total of sixteen clerics; twenty lay people were appointed members. Given that the PCL is all about lay people, one would have expected that there would have been a large majority of lay people as members of the Council.

Theoretically people get appointed members of pontifical councils because of their expertise. But, more likely they are appointed because of patronage of a particular cardinal or bishop already on the Council, or because of their involvement in particular church organizations. Leaders or members of the elitist ‘New Religious Movements’ (such as the Neo-Catechumenal Way, Opus Dei, Focalare, Schoenstatt) are highly favoured for appointment to the PCL. These are groups of laity who follow some special ‘way’, ‘program’ or ‘rule’ that, even if unintentional, inevitably creates a closed elite that separates them from ‘ordinary’ Catholics. While not strictly ‘conservative’ in the traditional sense, they tend towards a sectarian, ‘ghetto-Catholicism’. While not cults in the strict sense most of them manifest distinctively sect-like characteristics. (See my treatment of NRMs in Between the Rock and a Hard Place. Being Catholic Today, Sydney: ABC Books, 2004, pp 189-213). The New Religious Movements (NRMs) are massively over-represented in recent appointments of members to the PCL.

However, there is one small item of good news: the Spanish lay man, Kiko Argüello, co-founder of the so-called Neo-Catechumenal Way has not been re-appointed to the PCL. This is further evidence that the star of the Neo-Cats is waning in Rome.

However, an analysis of the lay people appointed to the PCL indicates that the large majority come from the NRM end of the ecclesiological spectrum, rather than from the ordinary ‘unwashed’ faithful. It is significant that there seem to be only two natural English-speakers as lay members of the PCL - Carl Anderson and Michelle Moran. Both of these come from the very conservative end of the spectrum: Anderson from the US Knights of Columbus and Moran from the UK Catholic charismatic movement. Otherwise the spread of cultures is pretty even: there are two Italians, three Spanish-speaking (one of them from Chile) two (possibly three) from Lebanon, two German-speakers, one Frenchman, and two from Asia (India and Hong Kong). But there is only one from the whole African continent where Catholicism is spreading rapidly. And she is from an associated with Focalare.

An analysis of the consulters of the PCL also reveals a lack of balance between clerical and lay members. Out of the twenty-four consulters thirteen are clerics, most of them archbishops or bishops. There are eleven lay consulters. The consulters do what the term indicates: they provide consultation to the PCL on specialist issues. Again there is a significant lack of natural English-speakers. One who might be loosely counted as an English-speaker is Marguerite A. Peeters. She is the Director of the Institute for Intercultural Dialogue Dynamics in Belgium and a theology professor at the pontifical Urbaniana University in Rome. She is clearly no fan of contemporary feminism (as a paper on the PCL website indicates) and the titles of her articles indicate that she is a right wing cultural warrior.

But even apparent lay people are not really laity. For instance Alejandra Keen von Wuthenau of Peru is actually ‘superior general’ of a recently approved (by Opus Dei Cardinal Juan Luis Cipriani Thorne of Lima) ‘lay society of apostolic life’. This sounds pretty clerical to me.

Again among the consulters we meet members of the NRMs. Italian canon lawyer Professor Silvia Recchi is a member of the Redemptor Hominis Community and teaches at the Catholic University in Cameroon. Another is Andrea Riccardi who is the founder of the Community of Saint’Egidio in Rome. At least Riccardi and Saint’Egidio espouse the more progressive end of the ecclesiological spectrum. Ms. Maite Uribe Bilbao of Spain is the director general of the Teresian Association which undertakes ‘the exciting task of awakening the Christian and human conscience in the world of education, culture, and the integral advancement of each person’ (Pope Benedict XVI) Another consulter from an NRM is Brazilian Dr. Moyses Louro de Azevedo Filho, founder of the Shalom Catholic Community which according to its website is active in more than 50 dioceses in Brazil and worldwide.

Among the consulters Spanish speakers predominate. By my count at least five of the eleven laity comes from the Hispanic world. Only one Professor Helen M Alvaré is from the Anglophone world. She is professor of law at George Mason University in Arlington, Virginia. The main reason for the absence of English-speakers is that the NRMs have not taken-on in the Anglophone world where we instinctively distrust religious enthusiasm.

So is Pope Bergoglio really serious about reforming the Roman Curia? On the evidence of the appointments to the PCL, he is not. But, then, we cannot expect him to micro-manage the Church. He can’t be expected to have an intimate knowledge of every Catholic. He depends on the likes of Rylko, Clemens and their off-siders who are still tarred with the Wojtyla-Ratzinger brush when the NRMs were all the rage.

This brings us back to the question of the kind of laity who will go to and influence the Synod on the Family. The reason why I said that it is these kinds of peculiar, elitist laity who will be appointed to the Synod is because they are already in pole position, as they say in motorsport. They are under starter’s orders already, whereas mainstream Catholic laity – the vast majority – have not even purchased their racing car yet. In a way you can’t blame Pope Bergoglio for this. If a more representative cross-section of laity were to assist the Synod and be appointed to Vatican committees the top clerical echelons of  the Curia need to be cleaned out and sent back to their dioceses for a bit of genuine pastoral work. Until that happens, little or nothing will change.

Background of Lay Members of the Pontifical Council for the Laity

And, finally, here is the PCL’ in action’ from a picture in the actual Vatican Press Release 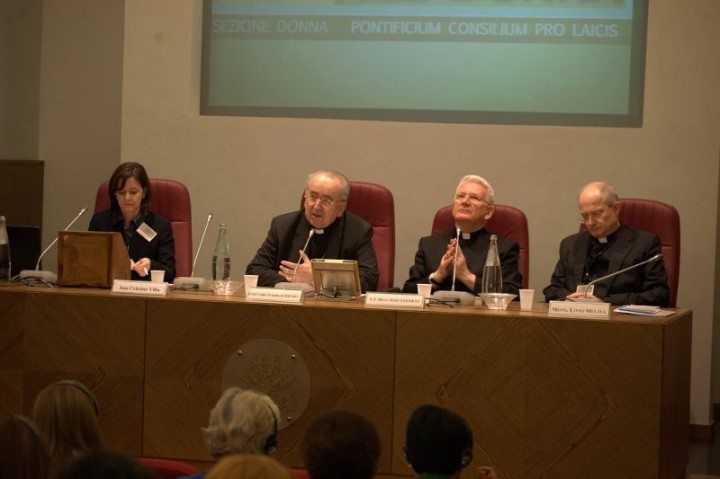