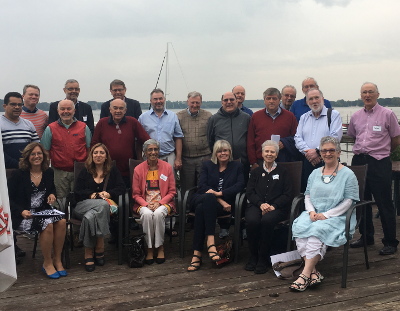 International Catholic Reform Network (ICRN) supports the ongoing work in parishes that are calling women and men to prepare them to preside over the Eucharist. This includes being responsible for the pastoral care and sacramental life of their parish community as was practiced in the early Church before the institution of the ordained priesthood.

ICRN calls on the Polish Bishops to comply with Church teaching regarding LGBT people that calls all to respect the intrinsic dignity of each person in word, action, and law. Attached below is our Warsaw Statement on LGBT.

ICRN voted unanimously to support the charter on the Fundamental Rights and Responsibilities of all Catholics worldwide which obligates the entire church to respect the primacy of conscience; the equality of all Catholics in the church; freedom of expression, including the freedom to dissent; the right and responsibility to participate in a Eucharistic community and to receive responsible pastoral care; genuine participation in decision making, including the selection of their leaders; due and just process when accusations are made; protection of children, and others.

We met with Halina Bortnowzka who was a close friend of John Paul II and participated as a journalist in the third session of Vatican II. She explained how many important discussions regarding the content of the document The Church in the Modern World (Gaudium Et Spes), took place informally, outside of the council hall. She found the experience so powerful that she has recently written to Pope Francis to ask him to convene another Vatican council.

We met with younger Catholics from Poland who talked about the thousand year history of the Catholic faith, the historical struggle of the Polish people to achieve national integrity and to know their national identity. They described the changes that are taking place in their Church. They shared their dreams for a church that is open and welcoming to all: the gifts of women, LGBT+ people; and, is willing to name the anti-Semitic sentiments so prevalent in Polish and Catholic life. They also want a church that is free of clericalism and sex abuse.

They want the Polish hierarchy to end their support of religious nationalism that is counter to the message of the Gospel and to support the reforms of Pope Francis.

ICRN is exploring Emerging Models of Parish and Community Life and invited Fr. Joseph Healy to speak to the group about Small Christian Communities that began to be formed in 1973 in Kenya. Presently they are present in 9 countries in East Africa numbering 180,000. We were inspired by this inclusive and co-responsible model of Church.

Another model ICRN discussed was calling women and men out of their communities, to prepare them to preside over the Eucharist, to be responsible for the pastoral care and sacramental life of their parish community.

Virginia Saldanha from Mumbai reminded the group about the need to include the Catholic experience in Asia which has been working to implement the vision of Church by the Federation of Asian Bishops’ Conferences. It is a vision of a Church that is a Communion of Communities, where “laity, religious and clergy recognize and accept each other as sisters and brothers” (FABC V, 8.1.1), a participatory and co-responsible Church.

ICRN practices synodality in decision making which is fully inclusive of all the baptized People of God. And we encourage synodality to be practiced at all levels in the church. ICRN feels a strong solidarity with Pope Francis and his efforts to create a more synodal church. We are hopeful that the aims set out for the Pan-Amazon synod are fully realized.

The International Catholic Reform network (ICRN) with representatives from 5 continents, met from September 22-27, 2019 in Warsaw, Poland.

ICRN was founded in 2012 for the purpose of drawing together the best practices of communities around the world to bring about a Church that is welcoming and inclusive, reflecting and living the Gospel message so as to bring about the reign of God in our troubled world.

Bishops Should Comply with Church Teaching

Warsaw Statement on LGBT from ICRN

The gathering of representatives of the International Church Reform Network (ICRN) meeting in Warsaw, Sept. 21-27, 2019 are saddened by the controversies in Poland between the LGBT community and the Polish hierarchy. When Bishop Wieslaw Mering of Wloclawek defended Professor Aleksander Nalaskowski who called LGBT people “Traveling Rapists,” he did not follow the Catechism of the Catholic Church’s mandate to treat lesbian and gay people with “respect, compassion, and sensitivity” (par. 2358).

The Equality Marches in Warsaw, Gdansk, Bialystok, and Poznan this year were opportunities for the Catholic bishops of Poland to show pastoral sensitivity for LGBT people. Instead the Archbishop Tadeusz Wojda of Bialystok described the Equality March as “an act of discrimination against Catholics.” Such rhetoric no doubt fueled, or perhaps instigated, the attacks of throwing rocks and firecrackers, along with degrading slurs, against the marchers in Bialystok.

We remind the Polish bishops of the 1986 statement of the Congregation for the Doctrine of the Faith, which said, “It is deplorable that homosexual persons have been and are the object of violent malice in speech and action. Such treatment deserves condemnation from the Church’s pastors wherever it occurs” (Letter to the Bishops of the Catholic Church on the Pastoral Care of Homosexual Persons).

We were appalled to learn that Archbishop Marek Jedraszewski of Krakow, on the 75th anniversary of the Warsaw Uprising, used the occasion to disparage LGBT people by saying that “a red plague is not gripping our land anymore” but that there is a new plague which is “not red, but rainbow” and that Poland is “suffering from a rainbow disease.”

Such remarks do not show respect for human beings who have been the object of discrimination and social intolerance. We call on the Polish bishops to comply with the Vatican’s instruction that “The intrinsic dignity of each person must always be respected in word, action and in law” and “to support with the means at their disposal, the development of appropriate forms of pastoral care for homosexual persons” (Letter to the Bishops of the Catholic Church on the Pastoral Care of Homosexual Persons).

Martha Heizer, +43.650.4168500, This email address is being protected from spambots. You need JavaScript enabled to view it.

Sr. Jeannine Gramick, SL, +1.301.864.3604, This email address is being protected from spambots. You need JavaScript enabled to view it.