New guidelines for priests are a backward step 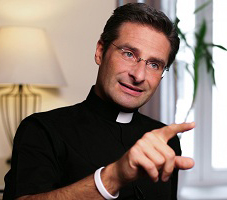 The Vatican’s Congregation for the Clergy has released a new document (dated December 8, 2016) entitled “The Gift of the Priestly Vocation,” which is a set of guidelines for priestly formation. Pope Francis has approved these guidelines.

“These guidelines are a tremendous insult to the thousands of gay men who have served and continue to serve the Church with honor and dedication” said Sigrid Grabmeier, Chair of We Are Church International. “These guidelines are also in complete contrast to Pope Francis famous comment ‘Who am I to judge?’”

The guidelines reinforce a sense of gay people as flawed, unfit for ministry, and as second- or third-class members of the Church.

Married people are all excluded as celibacy is made an absolute requirement. Women are also completely ignored. “By continuing to limit priesthood to celibate males, the Vatican is ensuring that women and people with families remain excluded from having any significant impact on dogma and pastoral practice in the Church, since ordination is a de facto requirement for holding the vast majority of positions of influence. Even more importantly, the exclusion of gay people and women gives support to the many countries and cultures where they are demeaned, attacked and even killed,” said Grabmeier.

“We Are Church believes that God calls people to serve the Church regardless of gender, sexual orientation, relationship or marital status, age, or any other human attribute,” continued Grabmeier. “We strongly urge that these guidelines be withdrawn.”

We Are Church International (IMWAC) founded in Rome in 1996, is committed to the renewal of the Roman Catholic Church based on the Second Vatican Council (1962-1965) and the theological spirit developed from it.

The key lines highlighted by "America" magazine suggests to me that we are witnessing yet another act of old homosexual self-hatred from the darkness within the clerical closet. God knows they are many acts of self-hatred in homosocial male societies like the military and  the Church. As old Freud noted, male patriarchal bonding demands a combination of a perverse culture of silence as well as an homoerotic element of power and seduction. The great enemy of that male power game in the military as well as in the Church has always been a "gay culture"and post-freudian feminists able to expose male ambiguity and self-hatred.

"Deep -seated homosexual tendencies" as well as a the notion  of a unified "gay culture" are old technical terms inherited from documents issued by JP 2 and B 16. In their original context they where supposed to suggest the CV of a future pedophile. I guess that connection is not explicitly made today, but is it still implicit, as "America" seems to suggest?

So friends, I am very happy with our press release and with all comments. Yes, priests and bishops who identify themselves as "gay" are a great treat to the clerical institution and we can extend support and solidarity. Yet, first and foremost, I believe we desperately need the inverted pyramid fight in exposing the liberating anthropology and indeed ecclesiology of the Gospel. Maybe, it is enough to witness in silence and in shame how the old clerical structures of abuse and self-hatred destroy themselves in these days, since most of "our" seminaries are empty? But as long as there are still young  people exposed to these seminaries and structures and many more to suffer as victims of  clerical abuse, I think we need to be outspoken!