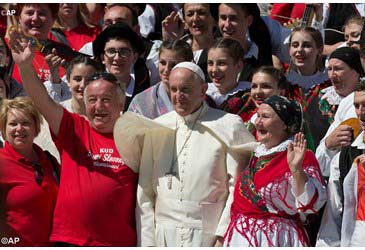 (Vatican Radio) Pope Francis said Tuesday that the clergy should serve lay people and not make use of them and spoke out against clericalism, calling it one of the greatest distortions affecting the Church in Latin America. His comments came in a wide-ranging letter reflecting on the role of the laity that was addressed to Cardinal Marc Ouellet, President of the Pontifical Commission for Latin America.  The Pope’s letter was a follow-up to the commission’s recent Plenary Assembly whose theme was “the indispensable role of the lay faithful in the public life of Latin American countries.” In his letter, Pope Francis explained that he wished to follow-up the discussions and reflections that emerged during the Plenary Assembly in order to prevent them "from not bearing fruit."

He urged the clergy to look closely at the people and lives of the lay faithful and avoid falling into the trap of adopting certain slogans on their behalf that seem well-meaning but in practice don't succeed in supporting the lives of our communities. Pointing to the example of a famous phrase “it’s time for the laity,” he noted that in this particular case, that clock has ground to a halt.

We must remember, he said, that as clergy we all began our lives as lay people and that “we’d do well to recall that the Church is not an elite of priests, of consecrated people, of bishops but all of us make up the faithful and Holy People of God.”

Turning to the issue of clericalism, the Pope said he considered it the outcome of “a mistaken way of living out the ecclesiology proposed by the Second Vatican Council” and described clericalism as “one of the greatest distortions affecting the Church in Latin America.”  He said clericalism has many negative impacts such as wiping out the personality of Christians and causing a belittling of the grace of our baptism that the Holy Spirit has placed in the hearts of lay people. Clericalism, he reminded, “forgets that the visibility and the sacramentality of the Church belong to all the people of God and not just to an illuminated and elected few.”

On the positive side, Pope Francis noted that Latin America is characterized by many examples of popular ministry and piety, saying it is one of the few spaces where the laity (including their pastors) and the Holy Spirit have been able to come together without clericalism which he said “seeks to control and put a brake on this anointment by God of the faithful.” He warned that this popular ministry “has its limits” and can sometimes lead to distortions of religion but said if it is "steered properly" it can generate many excellent human values such as generosity, devotion, sacrifice and openness to others.

Pope Francis spoke of the importance of giving encouragement and support to the efforts of the lay faithful who work in the public sphere but at the same time stressed “it is not the job of the pastor to tell the lay people what they must do and say” in those situations, adding “they know more and better than us.” “It’s illogical and even impossible,” he continued, “for us as pastors to believe that we have the monopoly on solutions for the numerous challenges thrown up by contemporary life.”

In conclusion, the Pope reiterated that the lay faithful are the protagonists of the Church and the world and stressed that “we are called to serve them, not to make use of them.”