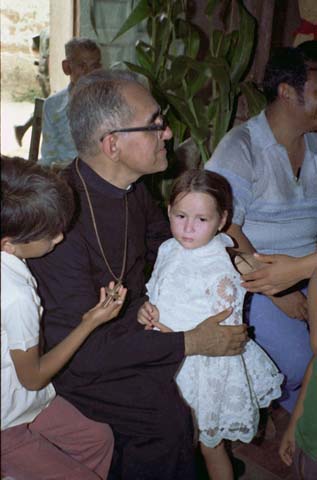 The cult of the saints and the procedures used , in their preparation are often ambiguous.

This form of religiosity - the veneration of the saints-was and remains  widespread for centuries in the Catholic world.

While respecting the religious feelings of the catholic faithful we believe that the cult of the saints must have its foundation in the Gospel .

However , this does not mean that  we should not honour  Christian people of extraordinary witness to the Gospel

Such a person is the assassinated Archbishop of San Salvador , Monsenor Oscar Romero.

Our joy for San Romero

. We will  rejoice on May 23 by participating in spirit and in prayer in the great demonstrations of joy of the people of El Salvador

Mons.  Romero was honored by his people shortly after his murder. His tomb became a place of pilgrimage and  : he soon became "Saint Romero of the Americas" and "San Romero of the world"’

. Romero has been considered a saint in the real sense throughout the Catholic world.

However  after 35 years of being ignored by the Official Church it remained for Pope Francis coming from a Latin American background to finally acknowledge the martyrdom of Monsenor Romero.

Over thirty five years powerful forces, both within the Vatican and El Salvador,  had successfully thwarted  any official recognition of Monsenor Romero eventhough other Christian communions h ad already done so.

The Anglican Church has placed his effigy among the great prophets of our age at Westminster Abbey , London

.Msgr. Romero is the planetary symbol of a faith committed to the defense of the oppressed and being a voice of the voiceless.

Romero represents   all the Latin American martyrs of the past half century, consisting of thousands of nuns, peasant leaders, community leaders, priests and bishops killed by regimes that claimed to be Catholics.

Msgr. Romero showed us a different way of being Church:. He amalgamated  the traditional and popular religiosity of his people with the defense of the oppressed, and resistance to violence and oppression.

Shortly after being appointed as Archbishop of san Salvador the death of his friend  the Jesuit Rutilio Grande and his friends Romero confronted the Government of El Salvador by refusing to attend the inauguration of its President and by having only one mass in San Salvador the following week at which he denounced the murder of Fr. Grande and  the growing murder of many catechists

For the next three years Romero stood up for the rights of his people against a growing repression by the Salvadoran Army and its death squads funded by the Government of the United States.

Thus Monsenor Romero was not just  a reader of Liberation Theology but practiced its values in his life.

Romero was a sign of contradiction and must remain so

"We Are Church" participate with joy and in the spirit of faith at this important moment for our Church, and for all the Churches.:

-It is important to realize that  Romero was not assassinated by atheists or adherents of another religion .

His death  is an example of martyrdom "in odium fidei" ( hatred of the faith )as he was murdered by other Catholics who went to Mass, and who considered themselves the true believers of the Gospel and who wanted to defend God and catholic "values".

Romero has to remain in the Church and in society  primarily as a faithful follower of Jesus of Nazareth who denounced the injustices of his time openly and fiercely.

Romero followed his Jesus faithfully a nd like him denounced the injustices as he found them and demanded justice for his people .

Like Jesus Romero too ended his life murdered for the sake of truth and justice.

These are the values that Romero stood for and so he remains as a witness to the Gospel and an inspiration for this generation of Christians and indeed for all future followers of Jesus of Nazareth.

International Movement We Are Church (IMWAC)

Iglesia Descalza: Jon Sobrino: "We don't want them to beatify a 'watered down' Romero"