The International Movement We are Church (IMWAC) supports Pope Francis’ course for substantial reforms in the RC Church and asks the Bishops to clearly support this new course for more transparency, decentralisation, and dialogue with the faithful.  Almost eight months after the election of Cardinal Jorge Mario Bergoglio from Argentina as Bishop of Rome he is marking out a new course in Rome like the questionnaire for the Family Synod in Rome in 2014 that was published last week.

IMWAC appreciates this new approach of consultation and it is asking the Bishops to let this questionnaire be answered by the faithful and local parishes directly.  The Bishops’ Conferences all over the world should follow the Bishops’ Conference of England and Wales who already put the questionnaire on the internet and invited the faithful to send in the answers (http://www.catholic-ew.org.uk/Home/Featured/Synod-of-Bishops-on-the-Family-2014).

Some of the questions and the wording might be open to criticism.  Therefore IMWAC will careful read the questionnaire and will prepare a Shadow Synod during the Extraordinary Family Synod in Rome in October 2014.  “This can’t be a Synod where only male bishops living in celibacy discuss the present situation of family life”, says Martha Heizer from We are Church Austria, Chair of IMWAC.  “We ask to include experts und faithful from the very beginning in the Synod who can bring in their experiences of different forms of Christian life in present times.”  IMWAC supports the idea of women cardinals as a first step in the opening of all ministries to women

IMWAC is aware of strong resistance especially in the Vatican against implementation of substantial reforms.  Many bishops are still reluctant to follow the new course. The deep crisis of leadership in the Church is not overcome yet.  Therefore IMWAC decided on a clear agenda for the next years. Besides the Shadow Synod IMWAC together with other reform movements is preparing a strategy to mark the ending of Vatican 2 in 2015.

Didier Vanhoutte from France gave an impressive report about his visit to Asia where he contacted many groups who have a similar urge for reform of the teachings and pastoral approach of the RC Church as IMWAC has.  The IMWAC movements in Latin America while not present at this meeting are an integral part of this reform movement especially with their emphasis on social justice.

Brendan Butler, +353-86 4054984, This email address is being protected from spambots. You need JavaScript enabled to view it.

Christian Weisner, +49-172 5184082, This email address is being protected from spambots. You need JavaScript enabled to view it. 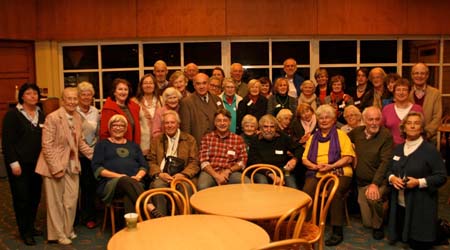