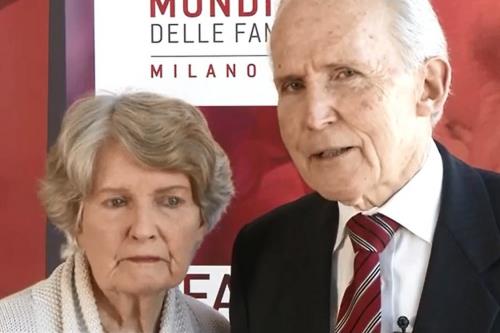 Text of their address to the Synod

Fifty-seven years ago, I looked across a room and saw a beautiful young woman. We came to know each other over time and eventually took the huge step of committing ourselves to each other in marriage. We soon found that living our new life together was extraordinarily complex.Like all marriages, we have had wonderful times together and also times of anger, frustration and tears and the nagging fear of a failed marriage. Yet here we are, 55 years married and still in love. It certainly is a mystery.

That attraction that we first felt and the continued bonding force between us was basically sexual. The little things we did for each other, the telephone calls and love notes, the way we planned our day around each other and the things we shared were outward expressions of our longing to be intimate with each other.

As each of our four children arrived, it was an exhilarating joy for which we still thank the Lord daily. Of course, the complexities of parenting had great rewards and challenges. There were nights when we would lie awake wondering where we had gone wrong.

Our faith in Jesus was important to us. We went to Mass together and looked to the Church for guidance. Occasionally we looked at Church documents but they seemed to be from another planet with difficult language and not terribly relevant to our own experiences.

In our life’s journey together, we were primarily influenced through involvement with other married couples and some priests, mainly in lay spirituality movements, particularly Équipes Notre Dame and Worldwide Marriage Encounter.

The process was one of prayerful listening to each others’ stories and of being accepted and affirmed in the context of Church teaching. There was not much discussion about natural law but for us they were examples of what Pope John Paul would later refer to as one of the Church’s major resources for evangelization.

Gradually we came to see that the only feature that distinguishes our sacramental relationship from that of any other good Christ-centred relationship is sexual intimacy and that marriage is a sexual sacrament with its fullest expression in sexual intercourse. We believe that until married couples come to reverence sexual union as an essential part of their spirituality it is extremely hard to appreciate the beauty of teachings such as those of Humanae Vitae. We need new ways and relatable language to touch peoples’ hearts.

As the Instrumentum laboris suggests, the domestic church has much to offer the wider Church in its evangelizing role. For example, the Church constantly faces the tension of upholding the truth while expressing compassion and mercy. Families face this tension all the time. Take homosexuality as an example. Friends of ours were planning their Christmas family gathering when their gay son said he wanted tobring his partner home too. They fully believed in the Church’s teachings and they knew their grandchildren would see them welcome the son and his partner into the family. Their response could be summed up in three words, ‘He is our son’.

What a model of evangelization for parishes as they respond to similar situations in their neghbourhood! It is a practical example of what the Instrumentum laboris says concerning the Church’s teaching role and its main mission to let the world know of God’s love.

In our experience, families, the domestic churches, are often the natural models of the open doors for churches of which Gaudium Evangelii speaks.

A divorced friend of ours says that sometimes she doesn’t feel fully accepted in her parish. However, she turns up to Mass regularly and uncomplainingly with her children. For the rest of her parish she should be a model of courage and commitment in the face of adversity. From people like her we learn to recognize that we all carry an element of brokenness in our lives.

Appreciating our own brokenness helps enormouslyto reduce our tendency to be judgemental of others which is such a block for evangelisation. We know an elderly widow who lives with her only son. He is in his forties and has Down syndrome and schizophrenia. She cares for him inspiringly and her only expressed fear is who will care for him when she is no longer able.

Our lives are touched by many such families.These families have a basic understanding of what the Church teaches. They could alwaysbenefit from better teaching and programs.

However, more than anything they need to be accompanied on their journey, welcomed, have their stories listened to, and, above all, affirmed.

The Instrumentum laboris notes that the beauty of human love mirrors the divine love as recorded in biblical tradition in the prophets. But their family lives were chaotic and full of messy dramas. Yes, family life is ‘messy’. But so is parish, which is the ‘family of families’.

The Instrumentum laboris questions how ‘the clergy [could] be better prepared … in … presenting the documents of the Church on marriage and the family’.

Again, one way could be by learning from the domestic church. As Pope Benedict XVI said, ‘This demands a change in mindset, particularly concerning lay people. Theymust no longer be viewed as "collaborators" of the clergy but truly recognized as "co-responsible", for the Church's being and action’.

That would also require a major attitudinal change for laity. We have eight wonderful, unique grandchildren. We pray for them by name daily because daily they are exposed to the distorted messages of modern society, even as they walk down the street to school such messages are on billboards or appear on their smartphones. A high respect for authority, parental, religiousor secular, has long gone. So their parents learn to enter into the lives oftheir children, to share their values and hopes for them and also to learn from them in turn. This process of entering into the lives of our other persons and learning from them as well as sharing with them is at the heart of evangelization.

As Pope Paul VI wrote in Evangelii Nuntiandi, ‘The parents not only communicate the Gospel to their children, but from their children they can themselves receive the same Gospel as deeply lived by them.’

That has certainly been our experience. In fact, we resonate with the suggestion of one of our daughters regarding the development of what she calls a nuptial paradigm for Christian spirituality, onethat applies to all people, whether single, celibate or married but which would make matrimony the starting point for understanding mission. It would have a solid biblical and anthropological basis and would highlight the vocational instinct for generativity and intimacy experienced by each person. It would remind us that each of usis created for relationship and that baptism in Christ means belonging to his Body, leading us towards an eternity with God who is a Trinitarian communion of love.

With thanks to Vatican News and Avvenire