We Are Church attended the funeral of Msgr Loris Capovilla,

Msgr. Capovilla: a protagonist of the Council. The condolences of We Are Church and of  the International Movement We Are Church 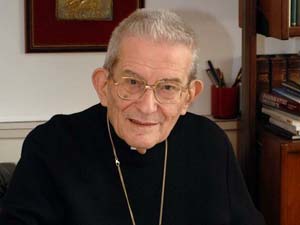 "I participated this morning in Sotto Il Monte at the funeral of Msgr. Loris Capovilla, the secretary of Pope John. I have represented the sincere condolences of Noi Siamo Chiesa, of the International Movement We Are Church (IMWAC), as well as  my personal, having well-known him in recent years.

Say "Capovilla" means  "the Council",  means "Pope John", for long difficult years in the life of the Church. Msgr. Loris was a bishop who always listened, and with real interest, what we thought and what we wrote. As he tended to still defend the ecclesiastical institution and to see, above all, the positives, I can say that he watched with great attention and availability to our analysis and to our proposals. With him we had established a relationship based on a real dialogue.

His positions were explicitly and unreservedly for the Council and for the spirit of the Council of which he was one of the hidden protagonist; It  was clear, conversing with him, his suffering, though never explicit in a direct way, for brakes, which, for decades, have blocked the implementation of the Council. Members of the ecclesial structure, impatient about the situation in the Church, went often  to him for advice. Hence, his obvious joy at the election of Pope Francis, who he considered a new Pope John and that gave him the purple of cardinals that had always been denied for what he represented in the imagination of a large area of ​​the Catholic world. "