Background re WMoF: There were two requests from countries to host the WMoF in 2018 in their countries. Neither request was from Ireland. But Pope Francis decided that the 2018 WMoF should be held in Ireland and this was announced at the 2015 WMoF in Philadelphia, the same year that Ireland had voted by Referendum to approve Marriage Equality (62% in favour). In January 2018 WAC Ireland spotted that images of same sex couples had been edited out of the WMoF preparatory Booklet. And shortly afterwards WAC Ireland noted an online video of a Bishop speaking about different family configurations was edited to remove all references to other family configurations. Both WAC Ireland and Global Network for Rainbow Catholics (GNRC) applied for stands at the WMoF. Neither was given a stand and a large number of stands were left empty at WMoF.

Background re Ireland: Ireland for centuries sent missionaries across Europe and around the world to spread the message of Christ. Even as part of the British Empire when our Catholic faith was suppressed it continued to support our population. After we gained independence in 1922 the Catholic Church assumed a central role in providing education, health and social services. Our governments heeded advice freely given by church leaders on many issues. When Pope (now Saint) John Paul ll visited Ireland in 1979 some 1.30 million gathered in the Phoenix Park for his mass. At that time over 80% of Catholics attended mass weekly. In 2018 only some 20% of Catholics attend weekly mass. What led to this huge turnaround? In 1980 artificial contraception was made legal; in 1995 Divorce was introduced; but by far the biggest factor was the disclosure of sexual abuse by priests which was covered up by moving them from parish to parish; the Irish State commissioned 4 judicial reports which in 2011 led to our Taoiseach Enda Kenny stating that “The rape and torture of children had been downplayed or 'managed' to uphold, instead, the primacy of the institution, which are its power, standing and 'reputation'. The Irish embassy to the Vatican was closed later that year. In 2013 a Report on the Magdalene laundries where unwed mothers were separated from their children and provided free labour was published. The reputation of the Catholic Church as trustworthy had collapsed. The majority of young people see it as an outdated institution with no real relevance to their lives. The 2015 Marriage Equality Referendum was followed by the 2018 Referendum to allow abortion in Ireland (66% in favour).

International Background: Pope Francis has struggled with the Clerical Abuse scandal for which he appointed a Pontifical Commission in 2013. Ireland’s Marie Collins (herself a survivor of sexual abuse by a priest as a child) was appointed to that Commission, but resigned after 3 years because of the ongoing obstruction to the work of the Commission in the Vatican. The Royal Commission in Australia in 2017 reported horrific stories of abuse and institutional cover ups. Earlier this year Pope Francis visited Chile where he supported the newly appointed Bishop Barros despite many calls for his removal. Pope Francis on his return did a U-turn and appointed a special investigator which led to all 34 bishops in Chile offering their resignations, 5 of which have been accepted. In June this year US Cardinal Theodore McCarrick was removed from all ministries and he resigned as a Cardinal following abuse of a minor and many seminarians over many years. Then just days before the WMoF was due to start the Pennsylvania grand jury released a 1,356-page report claiming that bishops, priests, and deacons within the Catholic Church in almost every diocese in Pennsylvania covered up child sexual abuse over a period of 70 years. Cardinal Sean O’Malley and Cardinal Donald Wuerl who were both scheduled for key roles at WMoF announced at a few days notice that they would not be travelling to Ireland. The withdrawal of Cardinal O’Malley gave rise to great concern as he has been heading the Pontifical Abuse Commission for over 5 years and his presentations had been eagerly awaited.

“Voices Pope Francis will not hear” organized by the Wijngaards Institute was held in Trinity College Dublin the day before the WMoF opened. The issues addressed included the marginalization of women; the vilification of LGBT Catholics; the ongoing silencing of priests & theologians; the harm caused by the papal ban on contraception; the abuse scandal and the 8th amendment abortion debate. The speakers were Dr Hille Haker; Jamie Manson; Dr Luca Badini; Tony Flannery; Dr Gina Menzies; Dr Siobhán Garrigan. 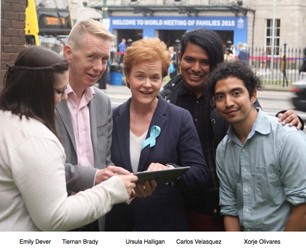 The launch of EqualFuture2018.com was organized in a pub directly opposite the WMoF so that journalist could easily attend. This website is aimed at young LGBT people and their families & friends to tell their stories ahead of the Youth Synod (October 2018). The website automatically send the stories to the Youth Synod delegates of the relevant country. The launch featured young persons from USA, Mexico, Venezuela and Ireland, as well as an audio link to a young LGBT man in China. 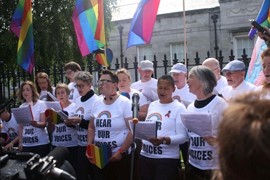 WAC Ireland helped organize a Rainbow Choir outside the WMoF who sang two songs: “Something Inside So Strong” and “We Are Family”. The 18 strong choir (who are all professional singers) wore T-shirts HEAR OUR VOICES and were heavily outnumbered by the huge media presence. The Gardai were very helpful and closed one lane of traffic as the media spilled on to the roadway.

WAC Ireland organized a colourful Welcome for Pope Francis on the Ha’penny Bridge at 10am on 25 August 2018. Together with Women’s Ordination Worldwide (who were holding their annual Steering Committee in Kildare where St Brigid lived) and Dublin Pride we decorated the Ha’penny bridge with Purple Umbrellas (WOMEN PRIESTS); Rainbow Umbrellas & flags in support of justice for LGBT’s and Blue Ribbons in solidarity with the survivors and victims of clerical sex abuse and cover ups. Again large numbers of international media attended to film, photograph and interview the large gathering. We carefully did not block the Ha’Penny Bridge for other users, which had been the main concern of Gardai. 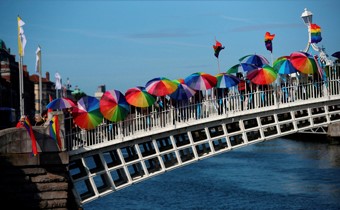 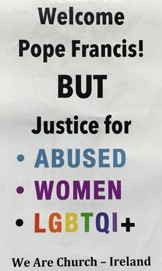 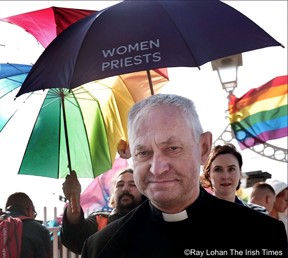 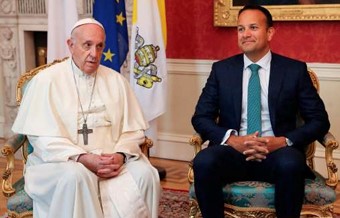 Pope Francis met Leo Varadkar, our Taoiseach (Prime Minister), who in a strong yet respectful speech expressed his hopes for a new chapter in the relationship between Ireland and the Church, one “in which religion is no longer at the centre of our society, but in which it still has an important place.” Varadkar is the son of an Indian Hindu doctor and an Irish nurse, brought up Catholic, openly gay, and at 38 when entering office, the youngest Taoiseach in Irish history. The contrast between the 81 year old Pope Francis and our young, gay leader only half his age for me also marked the contrast between the new Christian Ireland where there is a welcome for all and the clerical church which Pope Francis is trying to reform.

Pope Francis visited Brother Kevin Crowley who runs the Capuchin Day Care Centre in Dublin and is regarded as a living saint.

At the Papal Mass in the Phoenix Park only 130,000 attended, despite 500,000 tickets having been issued. That shows a 90% decline on the 1.3 million who attended the mass with Pope John Paul ll in 1979. A sign of hope was that 3 members of the All Are Welcome mass brought the Offertory Gifts up to Pope Francis at the mass. The All Are Welcome Mass is held every 3rd Sunday each month and includes a special welcome for LGBT people, their family and friends.

At the same time as the Papal Mass some 10,000 people gathered at the Garden of Remembrance for the Stand4Truth event in solidarity with the survivors and victims of clerical sex abuse and cover ups. After some speeches and several famous singers all 10,000 marched in silence to the nearby Magdalene Laundry.

Conclusion: Pope Francis has many important issues to deal with. Ireland has been tackling the clerical sex abuse scandal for many years now. There was disappointment that Pope Francis only offered apologies and did not indicate any new procedures in particular to deal with bishops and cardinals. With the Vigano letter and the former Cardinal McCarrick issues Pope Francis could certainly do with an Independent Tribunal to clear his own name and identify the guilty. No CDF tribunal can do that. WAC Ireland has issued a call for an Assembly of the Church in Ireland to propose new Structures for the Catholic Church, which include the people of God in all decision-making. We will also continue our work at grass roots level to build the church we want to see.