The German Bishops have announced a "binding synodal path" 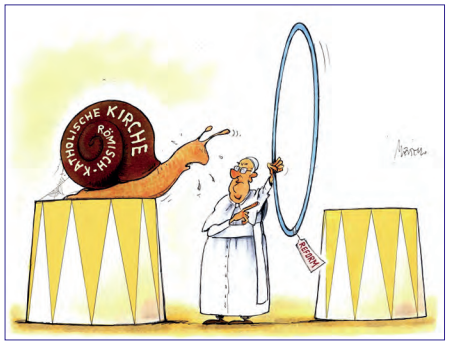 The German Bishops have announced a "binding synodal path" which will address (1) "Power, participation and separation of powers", (2) "Sexual morality" and (3) "Priestly life form". Pressure from Maria 2.0 and WAC Germany made the bishops add a 4th point: (4) "Women in the offices and ministries of the Church"

In response to the shocking results of the so-called abuse study published at the end of September 2018 ("MHG study"), the German bishops announced at their spring meeting in March 2019 a "binding synodal path" (see April issue CHURCH IN). Christian Weisner analyzes the opportunities and possibilities.

One must know the prehistory: After the Second Vatican Council there was in the late 1970s, the "Würzburg Synod" for the former West Germany and the "Pastoral Synod of the Catholic Church in the GDR", both of which presented church life in Germany in a very positive way. Thus, the statute of the Würzburg synod provided for equal rights between the bishops and the "laity", and even the bishops at that time advocated the introduction of the women's deaconate. However, these decisions were not even accepted by Rome, let alone answered.

However, according to the revised version of the Church Law of 1983, a statute such as the Würzburg Synod is no longer possible. Topics that contradict the teaching of the church must not be presented. Rome refuses to be bothered with such discussions and decisions. All this may have played a role when the German bishops at their spring meeting in March 2019 in Lingen in northern Germany offered the Central Committee of German Catholics (ZdK) a "binding synodal approach". It sounds a bit like a synod, but it is not subject to the current church law restrictions.

"The question following the crisis"

After the shocking results of the MHG study commissioned by the German Bishops' Conference ("Sexual Abuse of Minors by Catholic Priests, Deacons and Male Religious Members in the DBK") and the continuing high numbers of people leaving the church, something had to happen. Outside the meeting place of the bishops in Lingen several hundred faithful had illuminated the bishops with candles. The episcopal study day was under the theme: "The question of the crisis - overarching questions facing us now". However, the agreement on a "synodical path" only succeeded in the last half hour of the conference. And even then there were four bishops who did not support it.

In Lingen Marx declared that they had decided "to take a binding synodal path as a church in Germany, which enables a structured debate and takes place in an agreed period, together with the Central Committee of German Catholics. We will create formats for open debate and engage in procedures that will enable the responsible participation of women and men from our dioceses. We want to be a listening church. We need the advice of people outside the church. "

"Dodging the issues is no longer possible"

The research team of the MHG study very clearly named concrete "risk factors" of sexual violence in the church. Based on this, the future "synodal path" should take place in four forums. The bishops had already agreed on three forums in Lingen: "Power, participation and separation of powers", "Sexual morality" and "Priestly life form". However, the question of women's participation in church ministries was not to be an issue in its own right. But the more than 1,000 actions of "Maria 2.0" in Germany and the base of the Central Committee protested loudly. The Church Movement We Are Church sent an express letter to the bishops. Only under this pressure did the "Permanent Council" of bishops accept the fourth forum, "Women in the offices and ministries of the Church". Otherwise, the "synodal path" would probably have ended even before it had started.

"We always wanted to avoid topics such as sexual morality, selection of the clergy, celibacy and the practice and abuse of power, even in the dialogue and discussion process of the German bishops from 2011 to 2015, but this did not work", said Cardinal Marx, chairman of the Bishops' Conference. It was "an important step to consider a development of the teaching of the church to be possible". It is about making a certain pressure and will to change visible, "otherwise nothing will ever change".

That touches old wounds. Even before 2010, the "Joint Conference" of DBK and ZdK had planned a "future forum" for the Catholic Church in Germany, but some bishops had vetoed it. Only the detection of the abuse scandal in the Berlin Canisius Kolleg in early 2010 led to the readiness of the bishops to engage in a "dialogue process", but they had this process from the beginning fully under their control. The remarkable opening speech of then DBK chairman Robert Zollitsch showed the willingness to look beyond the abuse crisis to take a closer look at the much deeper church crisis. But this "dialogue process" was very quickly downgraded to a non-binding "discussion process" and eventually ended in failure. The occasion, the exposure of sexual violence that had been hushed up for years, was quickly lost sight of. Now this is the third attempt, and this third attempt must succeed!

"Do not accept changes in teaching"

But before the cautious "path to the synodal path" could begin, the fronts were already building up. The Cologne Cardinal Rainer Woelki, opponent of Marx, does not oppose the "synodal way" in principle, but the church can not "accept changes in its teaching ... if they contradict the spirit of the Gospel." The German retired cardinals Walter Brandmüller and Paul Cordes cling to a transfiguring image of the celibate priest. Brandmüller diagnosed in this context "a failure of the Council on a broad front". By contrast, the church historian Hubert Wolf in his latest book "Celibacy. 16 theses" that celibacy has been regarded as irrefutable only for 100 years.

Cardinal Gerhard Ludwig Müller, former Prefect of the Vatican Congregation of the Faith and now without a fixed task, accuses the Catholic Church under Pope Francis of working on its own dissolution in his latest book, with the harmless-sounding title "Roman Encounters". At the same time, Cardinal Müller forgets that in his five-year tenure as a prefect of faith, his inaction against sexual violence and his denial of systemic causes have contributed significantly to the escalation of the institutional crisis of the Church. Bishop Rudolf Voderholzer, his successor in Regensburg, considers it a waste of time and energy to discuss topics such as "power" and "participation". Augsburg's Bishop Konrad Zdarsa referred in his last interview before his retirement, to the "synodal way", with which he did not agree, as misleading labels - which in the worst case, he might possibly be right in the end.

"To the pilgrim people of God"

The unexpected letter from Pope Francis "To the pilgrim People of God in Germany", which triggered a very different echo, landed unexpectedly in this church-political concoction. The Regensburg Vicar General wrote immediately: "The synodal process can not take place as planned. Neither in content nor in form. "But the 19-page Pope's letter does not say that. Although the words "abuse", "celibacy" and "sexual morality" are not mentioned, the letter does not limit topics. Rather, Francis speaks of a "turning point in history", "which raises new and old questions in the face of which a dispute is justified and necessary". He encourages an "outspoken response to the present situation" and praises the fact that the Church in Germany "has given to the universal Church great sacred men and women, great theologians and religious shepherds and lay people". Francis speaks of a "synodality from the bottom up"; only then come the "synodality from top to bottom".

The scandal of clerical violence against children, adolescents, women and even women religious exists worldwide. Because the entire Roman Catholic world church is in an existential crisis, which is not triggered by the abuse scandal, but finds its focus in it. Many countries have already experienced their great awakening, other countries will follow. If it were possible not only to uncover the basic structures of abuse, but also to tackle them, then the church in Germany could even take on a pioneering role for the universal Church. The self-image of the church is in question. In order to address the basic question of what relevance Christianity (still) has, a fundamental change in doctrine and structure, in theology and pastoral care is urgently needed. By the way, one year ago, the Pontifical Latin American Commission recommended to the Pope to call a Women's Synod after the Amazon Synod.

The exchanges at the Pan-Amazonia Synod "New Paths for the Church and a Holistic Ecology" could be fruitful in the Vatican this October. The external conditions are very different, but in both cases, it is about whether local churches can decide for themselves what concerns them directly or not. So this addresses the basic question between decentralization and Roman centralization.

The "binding synodal path" is probably the only and perhaps last chance to overcome the current existential church crisis in Germany. For this, however, it will be necessary for the bishops to engage in a transparent dialogue without preconditions and on equal terms with the Central Committee, other members of the church folk, theologians and the reform groups. However, it is important to warn against placing too many hopes on this "synodical path" unless it is clear who will be involved in the manner in which the decisions will be taken and what their binding nature will be. According to current church law, no bishop is bound to the results of such a process.

But time is short. The window of time in which the church can regain its credibility is closing. If, according to the KirchenVolksBegehren 1995 in Austria, the reform points of We Are Church were also taken seriously and addressed by the church leadership, then many victims would have been spared great harm and the church would have avoided suffering immense damage, at least during the past 24 years.

Christian Weisner, We are Church-Federal team