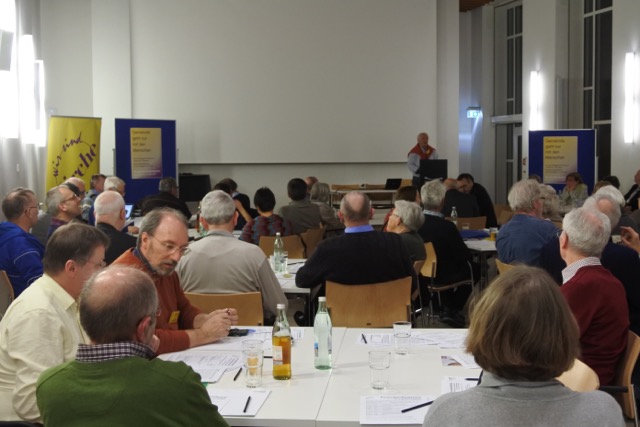 Key points for a new church  - future through community renewal

Call of the ChurchPeopleConferenz "Communities  only work with the people" 10./11. March 2017 in Würzburg

For decades, new pastoral plans and community strategy have been developed over and over again. Always new structural models such as Pastoral Care Units, Pastoral Spaces, etc. were propagated - but all under the premise of leadership by a priest. In view of the current conditions of admission to the priestly ministry and the growing lack of priesthood (58 priestly ordinations in 2015 and 80 in 2016 for the 27 German dioceses), all these paths have entered the impasse.

"We need a rethinking in the pastoral planning," the eleven priests of the Year of Consecration from Cologne write in 1967 in their open letter on the state of the church and the priestly profession. "The previous system has caused the churches to break down before our eyes. Grandparents are in every respect a guaranty: the increasing anonymisation and separation in society are then also encouraged in the church, instead of counteracting it. "

A church, which is not prophetic, builds up barricads for the future itself. To stop the erosion process of ecclesiastical life, a church change urgently needs to be addressed to the message of Jesus from the beginning of the kingdom of God and begins and begins at the level of the church. In the current cultural upheaval, the ChurchPeolpeConference invites all church members to bring the forgotten vision of Jesus of the future of a humanity reconciled in justice alive and to work consistently on a new future of world and society.

1. Parish is the basic building block of Christian community and Christian life

The community of the discipleship of Jesus begins with an expectation of the kingdom of God, which manifests itself in forgiveness, solidarity with the needy, social criticism and social commitment. However, an increasing secularization is also emerging within the church, which leads to the abandonment of traditional beliefs and individualization processes. That is why it needs first and foremost a modern theology of the church.

2. Church structures result from the impulses and needs of the community

Church is community "on site" by people for people. From these individual congregations, the total church is built step by step: Church as a community of communities and many smaller communities. The importance of the ecclesial community does not depend on a hierarchical structure for the faithful, but on the importance of the community, its commitment and its celebration to concrete life.

3. The individuality and plurality of communities must be valued and promoted

Every parish is different. This is shown by the letters of Paul, which were addressed to the respective parishes. This plurality of communities is to be encouraged. In addition to the territorial communities, people's communities by members who are interrelated are also to be promoted. Episcopal Ordinaries must allow this instead of just controlling and allocating resources.

4. The organization of a Christian community includes the service of the community leadership

The "community" principle is more original and important than priesthood and celibacy. Each church has the right and duty to appoint church leaders. The model of a priestly church, in which the priest is entrusted to the church as part of the herd of God, no longer bears the theological or purely numerical character. The number of priests in office can not and must not be decisive for ecclesiastical structures. Models of a pastoral service, which is only a supply, for example, with foreign priests, have no future.

It is therefore necessary to assess whether or not

5. Ensure the ability of communities to gather and celebrate the thanksgiving

The regular celebration of thanksgiving, the Eucharist, is an important source of community formation, the communio. The absence of a priest consecrated to a Roman model does not detract from the quality of the communion. According to the words of Jesus, "where two or three are gathered together in my name, I am among them" (Mt 18:20),  Jesus' presence is promised to the gathered community, whether by word or prayer, or by dividing bread and wine in a celebration, to work in everyday life as a Christian and a Christian.

6. New Culture of responsibility and decision in all structures of our church

The regular affirmation of their own baptism, the active confession of the prophetic message of Jesus, and the assumption of co-responsibility in a community offer the basis for all other possible functions in the Church. In this respect, all believers have a right to appoint leaders at all levels. It takes real decision-making that does not depend on the approval of the local priest and can fail in his veto. The financial resources of the municipality must also be paid directly by the church tax, and the money must be managed independently by the community.

7. Joint commitment in the community, on site and on a global scale

The official statistics still speak of "visitors" of services instead of the Co-celebrating of worship.  The first and foremost measure of a Christian community and its members however - far more than the fulfillment of the Sunday obligation - is the prophetic commitment to a just social order on the ground and on a global scale. Community can not only revolve around itself.

8. "Being a church together"

In order for the church to retain its important voice in a believable and perceptible voice in the current, highly critical human situation, it must be able to be experienced on site. The church exit waves show that there is no longer any time to lose, to think and to dare new things. Structures are not sacred and inviolable but have to serve the people. Services and offices have grown historically and thus changed in the interests of the ecclesial community. The common word of the German bishops on the renewal of the pastoral ministry "Together to be a Church" of 1 August 2015 has many impulses, which the Second Vatican Council has already set, but has not yet been implemented.