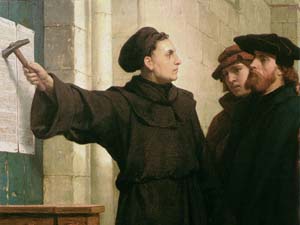 Concerns about what Reformation would mean today was discussed. It became clear that an ecumenism, which strives only for the peaceful coexistence, is too little. The goal must be "Fraternal Church", churches, together being aware of their common reponsibilitiy in the world and no more focussing on theories of differences. Here the Wittenberg appeal of the reform groups:

Anniversaries bring with it, to look back on the beginnings and on how magnificently everything has evolved. Are 500 years of the Reformation in this sense worth an anniversary? Church divisions and religious wars, mutual accusations, blame and exclusion up to the last decades, even to this day, are not a fame book for the churches. After a long, honest effort in the ecumenical movement, the trenches between confessions seem to be deepening. This must be stopped.

"Commemoration" goes beyond what has been remembered and celebrated in the Jubilee. Commemoration is a "dangerous memory"; Because we become aware of how far away we are from the origins and beginnings: "... that all are one." This "dangerous memory" also means that, as Christians, we enable human being in dignity for all and perceive and develop in its fullness. We have raised this "dangerous memory" in the conference "Do it like God – become man" in Lutherstadt Wittenberg.

Our common Christian conviction is radical follow-up to Jesus, who is the "servant of all". Being human means for us to be on the road in search of the realization of this conviction. If we are embracing the liberating message of the Nazarene man today in a new way, the steps to liberation from unjust economy, from exploitation and over-exploitation, from resource depletion and destruction of life, from discrimination, recklessness, conscience, and human contempt. But how can we call for the reconciliation of the people world-wide, if we can not even reach reconciliation among the Christians?

Reconciled diversity can only be a stage

The "reconciled diversity" is an important step towards a fraternal church. In it, different confessions, with different conceptions and traditions, work together in mutual respect to fulfill their responsibilities in and around the world. In the course of action beyond the confessional limits, the message of Jesus is once again placed in the center. A common Christian testimony is the communion celebration, which expresses this responsibility, a sign of the will to reconcile. The scandal that this sign is ultimately still withheld from us, as mature Christian we are no longer ready to accept.

We are committed to the fact that interconfessional ecumenism is no longer confined to petty theories that have long since ceased to affect people's questions today. The world is burning, and we are called to finally recognize the "signs of the times." In a ruthless world of selfishness, as Christians we have to witness  God's mercy. The greed for money, the free trade zones without taking account of fair trade for all, the refugee question and the economic gap between the northern and southern hemisphere, the threat to freedom and peace all over the world: these are the themes to which Christians today have a common Answer. Only then can we be credible.