We are Church at 100th Katholikentag in Leipzig 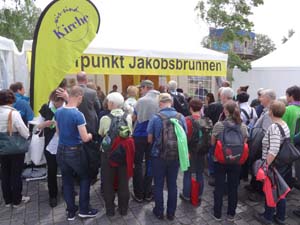 On 100th German Katholikentag  from 25 to 29 May 2016 Leipzig with the motto, "Behold the man " the Church People's Movement We Are Church was  again intensively involved under the headline: "Future. For church. For all humans."

Also  Eva-Maria Kiklas has been called for We Are Church from ZdK in the preparatory group -  "local Church - Church with the people".

The first German Catholic Congress was held from October 3 to 6 October 1848 in Mainz as "General Assembly of the Catholic Association of Germany", thrilled by the bourgeois-democratic revolution in March 1848 and as a reaction to the suppression of the Catholic population by the Protestant governments since the Congress of Vienna from 1814 to 1815, which resulted later in the Kulturkampf. At that time, the Katholikentag was purely a delegates meeting, for men only, to the 87 Club Members and around 100 other clergy and lay participants came. 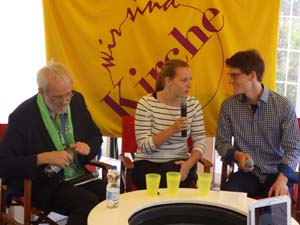 From then  there was a Katholikentag almost every year., with the exceotion of  the years 1914 to 1920 and from 1933 to 1947. It was in 1921, when at the 61. Katholikentag for the first time women took part as full members at the assembly. Since 1950, this event takes place every two years, alternately with German Kirchentag, the assembly of mainly protestants.

In recent decades, the Catholic has developed into a major event  in the style of a congress, connected to public events and encounters. It is organized by the central comittee of catholics, (Zentralkommitee der Katholiken, ZDK) in which the german catholic associations as well as  parish and diocesan lay councils are represented.   Many church groups introduce themselves to exhibition booths and provide information.  The five-day event is filled with numerous religious, cultural, scientific, socio-political and spiritual events.

Ahead was the decision to move the anniversary meeting in Leipzig, as risky. As a consquence of socialist surpression of religion during the time of the German Democratic Republic, only about 20 percent are Christians , only a little over four percent of the Leipzig are Catholic.

The Catholic was marked by political issues such as TTIP, environmental protection and sustainability. Other priorities were refugees and their integration as well as dealing with xenophobia and the new nationalism. Topics discussed included the "strange return to the 'Christian West' 'and the New Right in Europe. ZdK President Sternberg defended the decision to invite any AfD politicians to Leipzig. They did not want to organize any "Show Event" for the AfD.

In his speech to the 100th Catholic church historian had Prof. Dr. Hubert Wolf invited the German layman Catholicism to "develop again more potency and visibility in the Church and the world" with clear opinions. 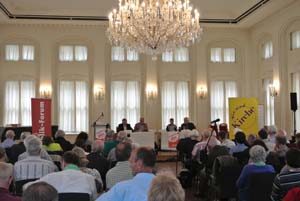 Prof. Wolf was also - together with Prof. Dr. Hermann Haring and ZdK Vice President Karin Kortmann - on the pannel of the discussion provided by We Are Church -  "The entire body of the faithful cannot err in matters of belief.  " (LG 12) On the rediscovery of the theology of God's people in the spirit of Vatican II..

For the three-day Katholikentag plus, organized by We Are Church and  the Readers´ Initiative Publik Forum are in the "Old Market",  beyond the offical program, the Pope saying "This economy kills" was the red thread. After the impressive opening of Eugen Drewermann  the various events showed that only an economy that serves as well environment and humans can achieve a just coexistence of all people. A truly unique positioning of the two major churches against any further exploitation of creation and the poor, which include the majority of Christians worldwide, is still pending. Further topics of Katholikentag Plus were trade agreements, 500 years Reformation, sexual grip and violence, the challenges posed by refugees, peaceful revolutions, limits to growth and capitalism. We Are Church also participated in the demonstration "For a fair world trade" through the center of Leipzig. 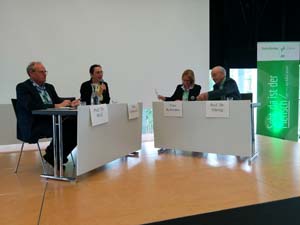 Great popularity again achieved the "talks at Jacob's Well" in the big tent.  Guests from politics, church and society who have been invited for a 50 minutes talk were attracting plenty of people.

On the Katholikentag of ZdK but also the still lacking willingness of the German bishops for reforms  became clear at many points.  Therefore, the resume of We are Church: "Church people and bishops, what are you waiting for?"