Today is the International Women's Day. In the morning Martha and I had the last briefing together. Change.org might start an international campaign with us about the main tasks of the next pope. Then Martha left for her home in Austria. At the moment I'm the last of IMWAC's team in Rome. I read in the news what the journalists wrote about our event yesterday evening and answered requests from other journalist who will come to Rome in the next few days.

It is still raining in Rome. At St. Peters Basilica a discovered that the pilgrims and tourists walk over the plaque which commemorates Pope John XXIII and the date of the opening of the Second Vatican Council. 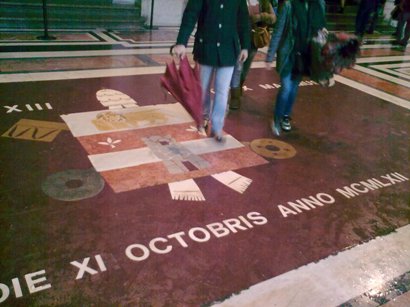 At noon I went to the Vatican's press office Sala Stampa. I'm not an accredated journalist but I wanted to meet there some friendly journalists who I know. Just by chance the German television recognised me and asked me what we, the People of God, would want the next Pope to do first. I said the usual arguments. In the afternoon I just dropped in into an Orthodox liturgy - and enjoyed the richness of Chistian liturgies with a nice Choir, candles, and incense.

Tonight the Vatican announced that the Cardinals will start the Conclave on Tuesday. Now the date is fixed we have to plan for our second presentation which unfortunately will be without Anthony Padovano and Michael Walsh who already had to leave for home, but Martha will come back. Could it be seen as a slight sign of change that the Cardinals announced the date for the Conclave on the International Women's Day???

"It is indeed an additional good omen to announce the opening of the Conclave on International Women's Day. I am sure that things will continue changing. If you look back you will realize how many things have changed! We are at a cross roads and the current crisis bears lots of chances. So our presence (visibility) in Rome and elsewhere and our voices now are particularly important. I am further convinced that many diverging voices are better than one single strong voice. The Catholic faith community is like an orchestra that has largely learned to play on their own interpreting the symphony of the Good News. A large variety of instruments play different roles in that symphony. We are expecting a new director for this orchestra to be appointed soon - and hopefully he (no she possible for the moment! - unless...... a miracle would happen! -) he will be able to play this marvellous instrument that an Orchestra constitutes.... But a director without the orchestra.... is nobody!"

Cardinals of the Roman Catholic church will enter the Sistine chapel on 12 March to begin the conclave that will elect the 266th pope, theVatican has announced.

Yesterday SNAP (Survivers Network Abused by Priest) published a blacklist of 12 Cardinals. This is different to our purpose which is to bring positive suggestions from the People of God to Rome: a way of bringing about a new system of decisionmaking which is badly needed in our church.

Today was THE day that we had our first presentation about the history and the future of the future of the papacy with five perfect speakers: Martha Heizer(AT), Michael Walsh (UK), Paul Collins (AU), Anthony Padovano (US) and Marylin Hatton (AU). Basilio Buffoni and Vittorio Bellavite, together with some very good helping hands, had organised everything very well. You will find the statement in various languages below on this website.

What I said yesterday still holds true. We don't know the date of the beginning of the Conclave yet. It might start even later than March 10 or 11. The Cardinals are still discussing the general situation in the church.

Anthony Padovano and Michael Walsh are leaving tomorrow. Martha Heizer is going home but will come back for our next press conference that hopefully will take place shortly before the beginning of the Conclave. I will stay Rome and will wait.

A noteworthy quote from the NCR

One reporter asked about a video shown Wednesday of the preparations being made for the Sistine Chapel that showed a woman sewing cloth hangings for the chapel's walls and asked if women were involved with the conclave in other ways.

"There could be other women involved in the whole preparation for the conclave, in serving the fathers" at their hotels, Basilian Fr. Thomas Rosica said.