This morning the Cardinals prayed in St. Peter's basilica for a good election of the next pope while the women had their "pink smoke" activity nearby. I couldn't go to both events because I had to send out a press release for Hans Kueng's 85th birthday next week, to prepare our press conference and to answer all media requests. But Martha (who is back from her home in Innsbruck/Austria) and Marilyn and many others went there. You can see a report on the Internet . It was the top news at yahoo.it.

In the afternoon we had the IMWAC press conference at Stampa Estera, the Foreign Press Association, where almost 20 journalists from international media were present. Vittorio (who came from his hometown Milano for today), Martha, Marilyn and I had many one to one interviews afterwards. I would like to say many thanks to Stampa Estera! From there I rushed off to a live interview with France24, later this evening I had two radio interviews with BBC at St. Peter's square. In fact I was interviewed together with an American professor at the Opus Dei university in Rome. The funny thing: We had very similar ideas what needed to be changed in the church - at least more collegiality and a better esteem of the laity. From there we could see the smoke of the first ballot - it was black.

The hotel where we stay until now is very nice but much to far away from the Vatican. With the help from my wife and her best friend in Germany I found a hotel very close to the Vatican where we will move to tomorrow morning. We have to be at hand to the journalists when the white smoke will come from the chimney of the Sistine Chapel.

Collegiality, pastoral wisdom, justice and the hopes of the people of God featured in presentations made at the Monastero delle Suore camaldolesi all'Aventino on Thursday evening (7 March 2013)

Noi Siamo Chiesa and the International Movement We Are Church arranged the meeting to offer analysis and reflection at this important moment in the the life of the Church.

Journalists, church workers and representatives of various organisations and movements heard brief presentations by Catholic speakers from three continents.  More information may found by clicking on their names

Following the presentations the speakers were pleased to receive and answer many questions.

The opening day of the Conclave has not yet been decided; but today as in 2005, there are great expectations that this might mark a turning point in the Church and make the gospel of Jesus more and more heard in ourworld. The problems experienced during the pontificate of John Paul II are still unresolved, or have worsened.  Nonetheless the conviction remains that the situation can change for the Word of salvation is powerful.

It is the duty of the College of Cardinals to recognise the seriousness of the situation, to read the signs of times. The Cardinals have in their hands both the book of the Gospel and the documents of the Second Vatican Council. They must read them, and meditate on them. Within them are the directions, sometimes implicit but often very explicit, for the road the Church must travel. The expectations of those who appeal to the Council have already often been voiced. “We are Church” has contributed to raising issues about the Church as a whole, but with especial emphasis on the reform of the Papacy, because that is the key to the entire structure of what is the modern Catholic Church. We shall briefly recall four main issues.

Today we got confirmation from Stampa Estera, the Foreign Press Association here in Rome, that we are invited to give a press conference in their office. This is a unique chance for us to get close contact to the international journalist in Rome. The press conference was planned for 11 a.m. but was postponed to the afternoon 14:30 p.m. because of two reasons: The Cardinals will have a prayer in San Pietro basilica at 10 a.m. and a "pink smoke" activity of women fighting for women's ordination will take place at 11 a.m. at Piazza Garibaldi. Vittorio has written a new draft for a press release and I work all day with sending and receiving emails, trying to coordinate the next days of the Conclave.

When I gave a short interview this morning to the Spanish TV-channel La Sexta near San Pietro I met just by chance an Auxiliary Bishop from Germany who was also in Rome for an interview. He is one of the open minded Bishops in Germany you can see quite often in the media. He told me: Now it's time for a new start, a break-up in church. I hope the Cardinals would listen to him if they don't listen to us. Reform certainly is needed in the centre of the church, in the Roman Curia. But will it be only a little bit of reform to keep the present system alive ? Or will we see substantial reforms as we and so many are asking for? I'm thinking of Hans Kueng (who will celebrate his 85th birthday on March 19) and of so many other theologians all over the world.

While I'm writing this diary Martha Heizer, IMWAC's chair, is on the night train from Austria to Rome to join our team again. Good night, Martha! Good night to all of you. 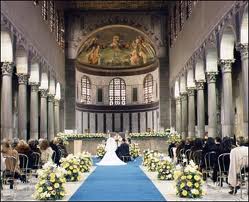 Yesterday I walked through sunny Rome and visited Santa Sabina all'Aventino (one of the oldest and probably the most beautiful church in Rome), San Allessio and Sant'Anselmo (Benedictine University and College in Rome). But this was the only free time I had here in Rome since I came here on Monday. Even at the churches I got phone calls and met a journalist I know from Germany. More and more journalists are now coming to Rome and want to talk to someone from We are Church. At today's breakfast I met three of them in the hotel where I am staying.

With the beginnig of the Conclave fixed by the Cardinals for Tuesday afternoon time is too short for Stampa Estera to invite us for a press conference and too short to organise a press conference of our own. So we will send out a press release on Monday morning telling the Cardinals how they should vote. I am joking, of course!   I'm sure some of them are in favour of some reforms. But are they strong enough to find a common candidate? And are they strong enough to stop the group connected to "Opus Dei" and "Movimento di Comunione e Liberazione"?