Summary of the conference 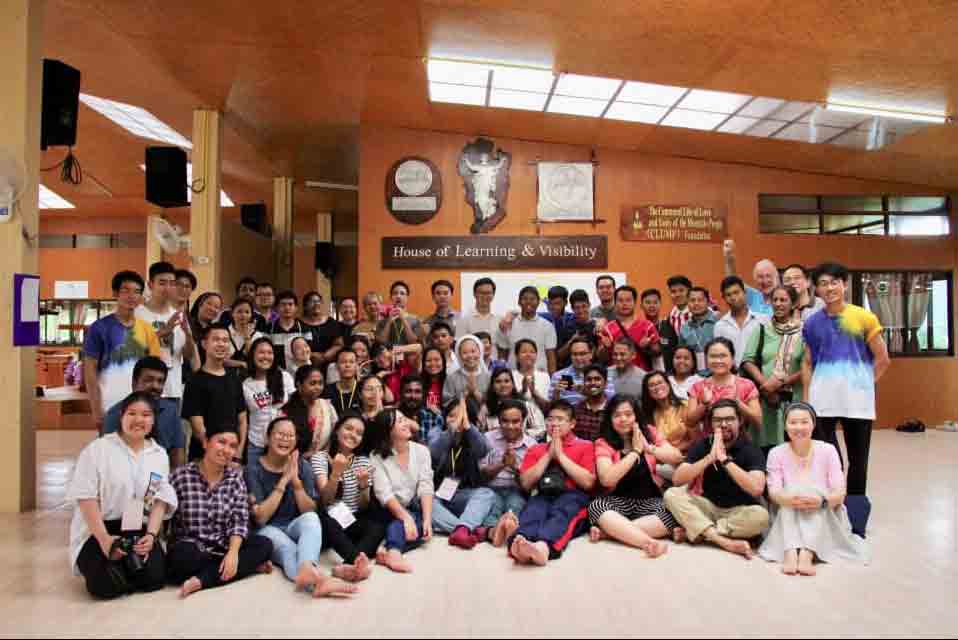 We Are Church has been sending a delegate to the Asian Youth Academy (AYA) and Asian Theology Forum (ATF) since 2013 (Didier van Houtte; Jean Pierre Schmitz; Martha Heizer and myself). It is organised by the Asian Lay Leaders (ALL) Forum which is managed by Paul Hwang. ALL invites young leaders (aged 25 – 35) from 12 – 15 different Asian countries to spend 10 days together learning about each others countries especially regarding Indigenous Peoples (IP), the environment, climate change, community building, cultures and faith development. In 2019 the meeting was in ChiangMai in Thailand, based in the CLUMP Centre in Doi Thong.

The program started with a Welcoming Ceremony lead by tribal chiefs. We were divided into 5 groups to visit and live in small remote villages of the Karen people. My group was based in Mae Aeb, a village of 150 people, 7 km off the main road along a bumpy twisting road. We tried planting rice, which was a wonderful experience to remove socks and shoes and squelch in the muddy 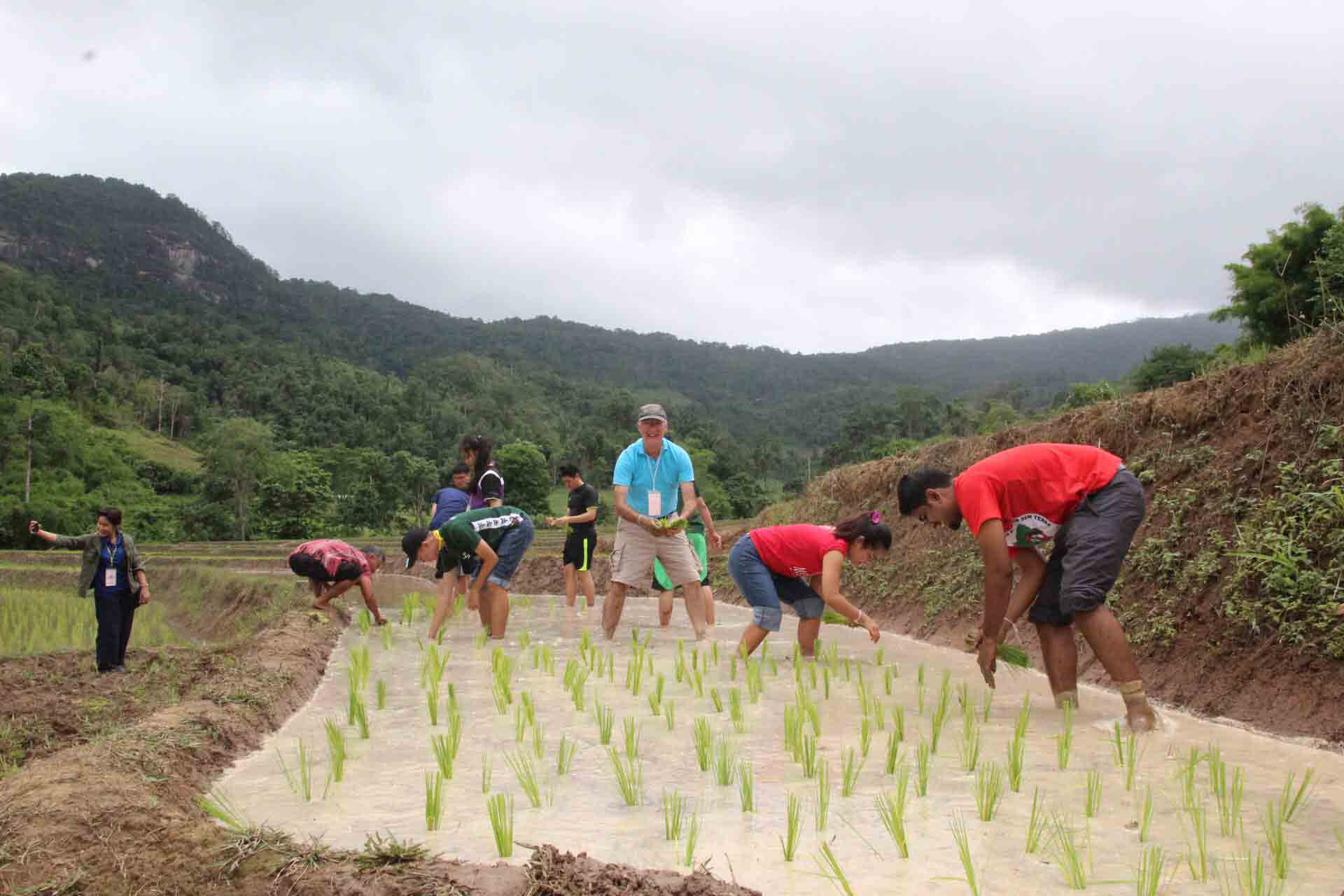 water. We visited the weaving operations and had a long Question & Answer session with the village chief via interpreters and facilitators as the Karen people have their own language, which is very different to the Thai language; we had meals in our host families who looked after their guests first before eating themselves. We helped the village repair their access road with stone chippings, which we helped distribute to fill in holes and repair the road. Our village has now got many links with the outside world; 30 years ago they were totally agriculture based and self sufficient; today many of the young work in the city; and today the village has several pick up trucks, motor bikes, water & electricity supply, Satellite TV and mobile phone network coverage. They are mostly Catholic with a good number of Buddhists who cooperate well together.

Back at the CLUMP Centre we had a very varied program:

1. Neoliberalism: Fr Bros Flores: The priority of economic growth at the expense of people, families and neighbourhood

5.1. Kochurani Abraham: A church of the people, by the people and for the people. Challenge clericalism’s decision making/spiritual/theological and administrative powers

6.2. Christianity: Amalia Tessa: Pope John Paul ll published “Theology of the body” about which he himself had misgivings; when Pope JP2 arrived at the gates of heaven he asked St peter: “Is He mad at me?” and St peter replied: “No, She’s furious!”

7. Breaking the Culture of Silence in Asia: Bishop Pablo David: Woe to me if I keep quiet when I should speak out.

8. A new theological vision for Asian Christianity: Fr Michael Amaladoss SJ: The world is a gift; but greed and consumerism make some rich and some poor; “Compel them to come in” was the vision of missionaries to South America – certainly not the vision of Christ; the model of Jesus on the last day of his life: (1) SERVICE (washed the feet) (2) SHARING (food) (3) SELFGIFT (love one another)

9. Peace building: Marites Guingona Africa: Founded Peacemakers Circle Foundation in 2001; Respond with good to evil; be courageous & prophetic; reach beyond our comfort zone; have the courage to take risks.

11. Rome Sex Abuse Summit (2019): Colm Holmes: Four expectations: (1) Zero tolerance [NOT delivered] (2) Global policies [NOT delivered] (3) Accountability for bishops [delivered but without lay people involved] (4) Pontifical Secret (NOT removed for trials of abusing clerics]. Clerical sex abuse will continue in many countries with no learning from the experiences elsewhere.

12. Mekong and Myitsone Dam Projects: Teerapong Pomun; Argued for No Dam on the Mekong.

13. UN Declaration on Peasant Rights: George Fernandez: 12,000 suicides by farmers every year; only 2% of women have access to land ownership; Genetically Modified (GM) crops imposed by Multinational companies (MNC) are leading to slavery farmers; In France 500-600 farm suicides per year; Patenting of seeds bill in Indian parliament; this will mean that if small farmers stop farming, but then want to resume they may not take traditional seeds from other farms as now, but must then buy from MNC’s.

15. There were also Reports on all the immersion field trips and Country reports. Two interesting examples:

15.1. Sri Lanka focussed on the 8 bombings which killed over 200 on Easter Sunday April 2019; Sri Lanka is 70% Buddhist, 12% Hindu, 10% Islam, 7% Christian; they noted that despite 10 years of peace following the civil war (1983 – 2009) there had been discrimination against the Muslim community; there was a realisation that the different communities need to work together to promote equality, peace and justice.

15.2. India warned of the early signs of fascism with the Hindu BJP now with a large majority; Anti-Conversion Law’s are in 8 out of 29 states; Triple Talaq Bill for divorce can lead to 3 years in prison which will harm all the family; Ghar Wapsi Back-to-Home for reconverting back to Hinduism. The Cast system is mirrored in appointments in the Catholic Church in India and also on Islam.

We visited a number of temples, but the most interesting visit was to the Women Monk’s temple NIRODHARAM, which was located close to our CLUMP conference centre. Many in Thailand do not accept the Women Buddhist monks. But they also have a strong base of supporters as witnessed by the modern facility they live in. They were very welcoming to our group – I myself made 4 visits to them. In particular I found their techniques for meditation very useful; especially the “labelling” technique for when you are getting distracted and you label it “Thinking –Thinking – Thinking” or “Coughing – coughing – coughing.” We practised WALKING, SITTING and SLEEPING meditation techniques with them. 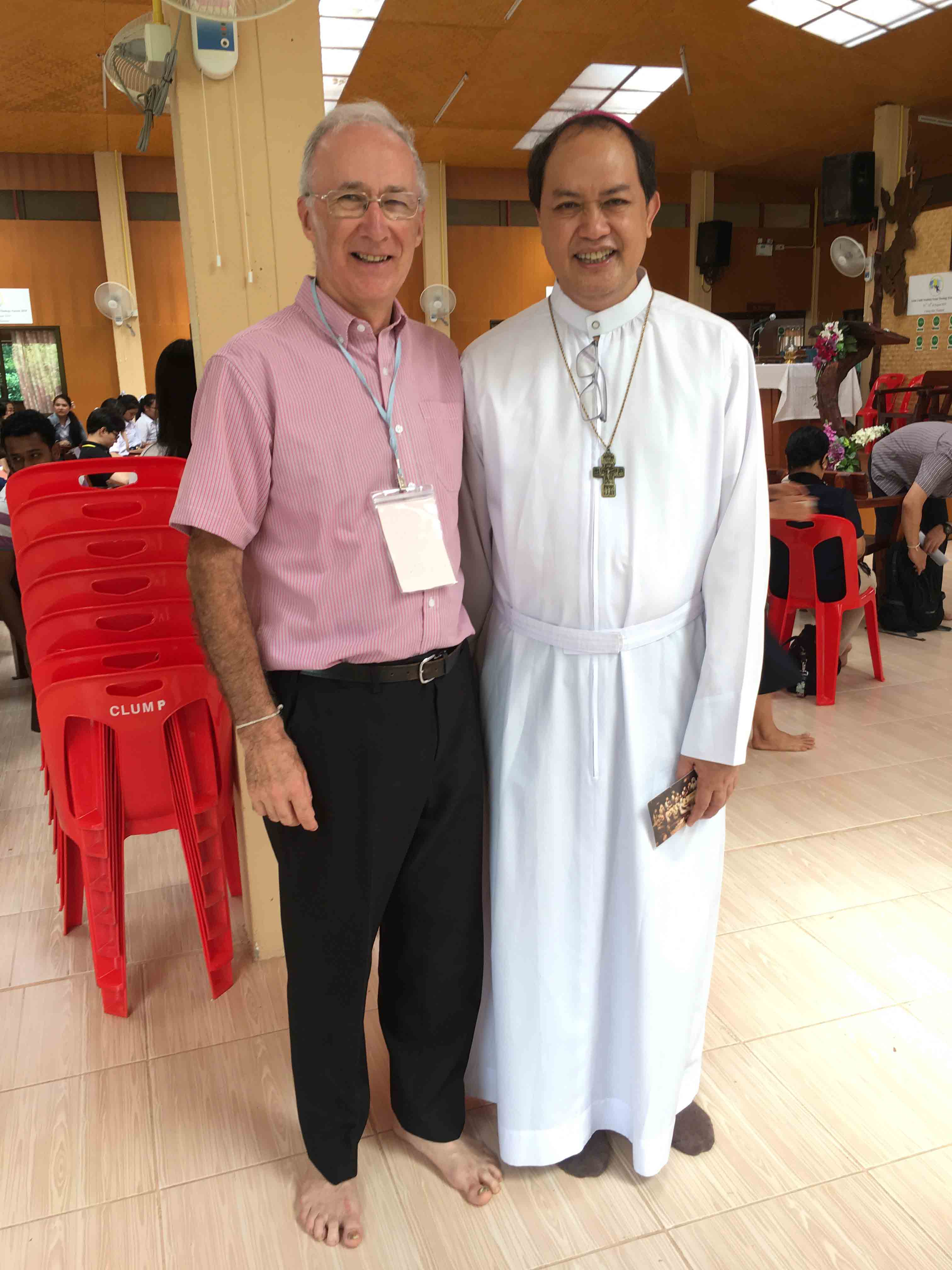 On our second visit 35 of us (including Bishop David) met 41 monks and 35 supporters/parents. A 33 year old young monk called Achiraya (Achi for short) who was ordained only 8 months ago told her story (all this meeting was recorded on video and published on their Facebook Page). Achi comes from a wealthy family and got her PhD. She wrote and published 11 books, became an alcoholic and chronic arthritis put her in a wheelchair. Despite her apparent successes she felt lost and empty inside and decided she should become a monk. The leader at the temple warned her that the regime is tough and strict: Rise at 3.30am every day; only one vegetarian meal per day at 7.30am; two talks per day from their guru-teacher; they go begging in town; they sweep and clean their temple; they shave their heads every 7 days; no radio; no TV; no newspapers or magazines; the only news from the outside is whatever their guru-teacher tells them about the outside world. Their 5 initial training rules are: 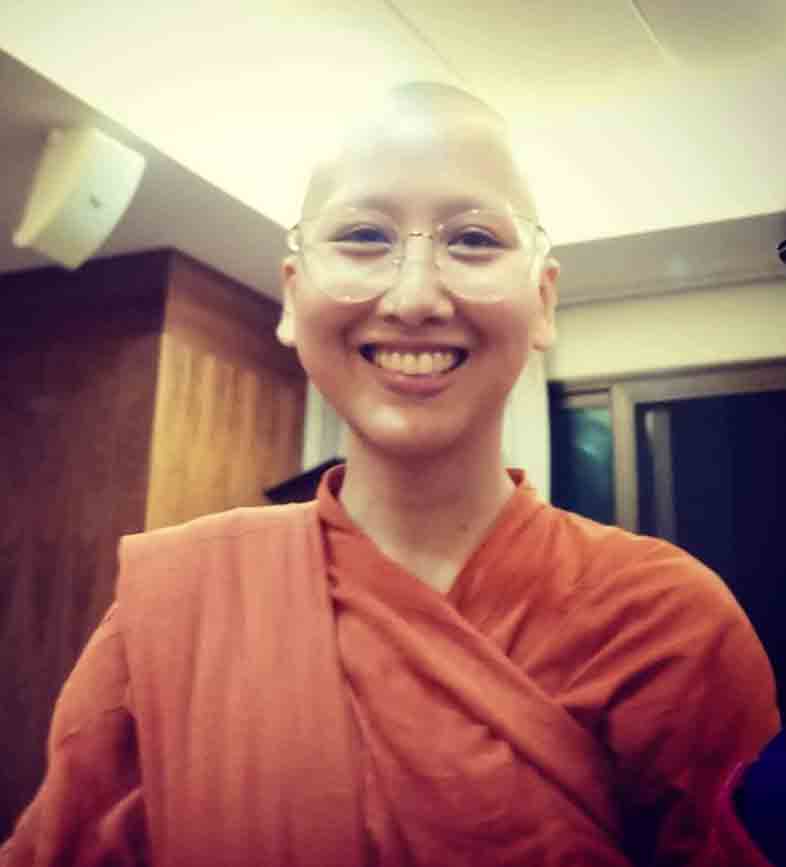 Achi said she could accept this regime and she was ordained 8 months ago. Since joining the temple she has recovered her health and now is free of her wheelchair. She says she is happy, healthy and fulfilled in her life as a monk. I asked was she allowed to keep in touch with her family and friends and she said yes, pointing out that her parents were there in the audience. She is free to leave the temple if she wanted to. Achi flies to Bangkok every 3 months for her medical checkup.

They all follow the Buddha’s teachings (Dhamma) and aim to achieve ever higher levels of happiness and fulfilment. It appeared to be mainly centered on the individuals enlightenment, with engagement with the wider outside community seen as less important. Some of the monks drink their own urine, which is believed to have therapeutic benefits. They have links with some male Buddhist and meet regularly every 15 days. The brothers help their little sister and vice versa. We queried why they were “little” sisters, asking should they and their brother monks not be equals? The reply was a lot of smiles and saying they were happy to be “Little” sisters. There are 311 precepts for women and 227 precepts for men. All women monks no matter how senior must prostrate themselves before every male monk, no matter how junior.

When the presentation was over, I was asked to say a few words of thanks. At the end I was left holding a cordless microphone. I walked over to the monk as she tidied away the video camera & tripod & cables and offered her the microphone. She backed away and gestured for me to place the microphone on the floor, which I did. She then picked it up and tidied it away. They may not touch any man and may not take anything from a man. They were happy to shake hands with some of the women in our group, but keep their distance from men. 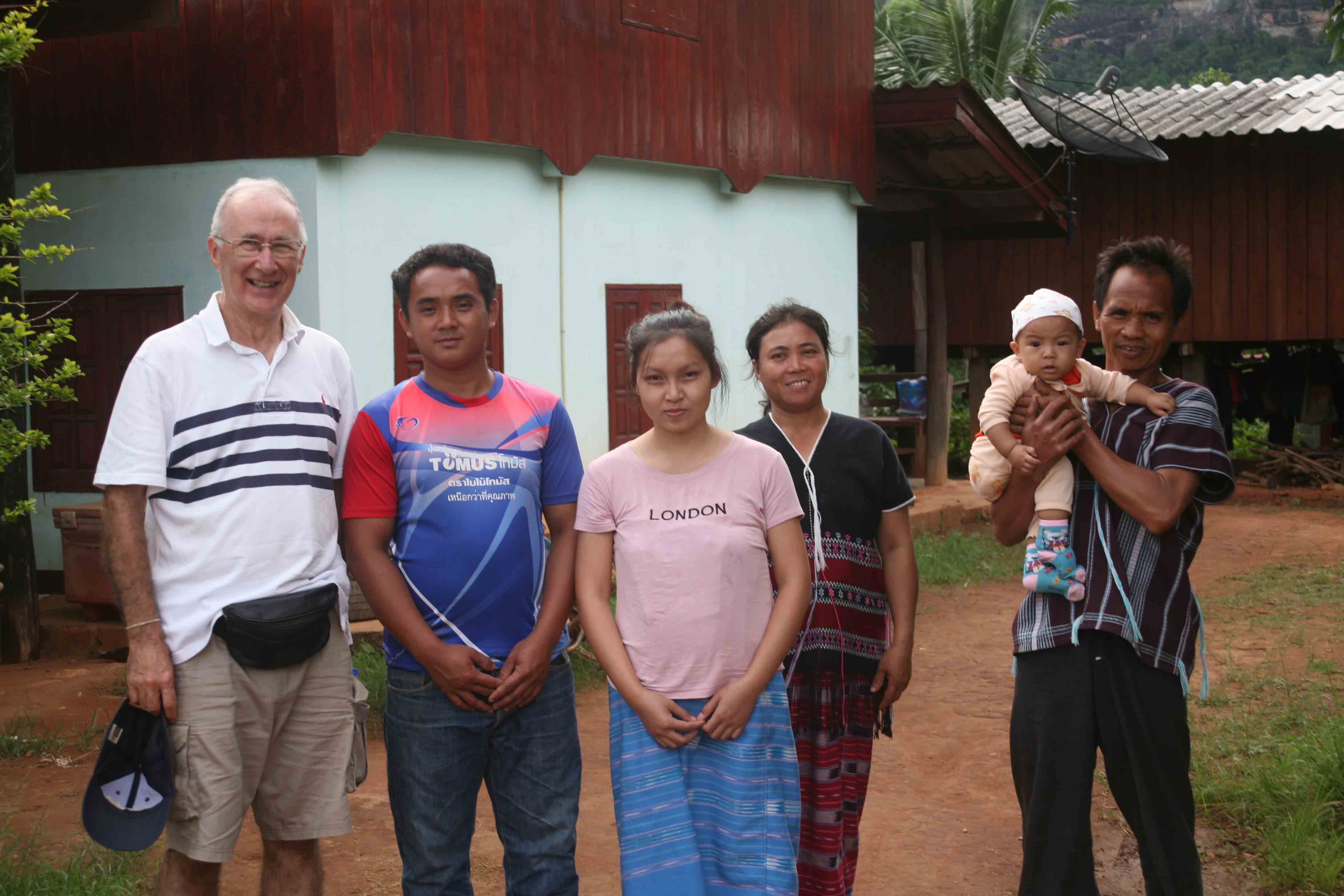 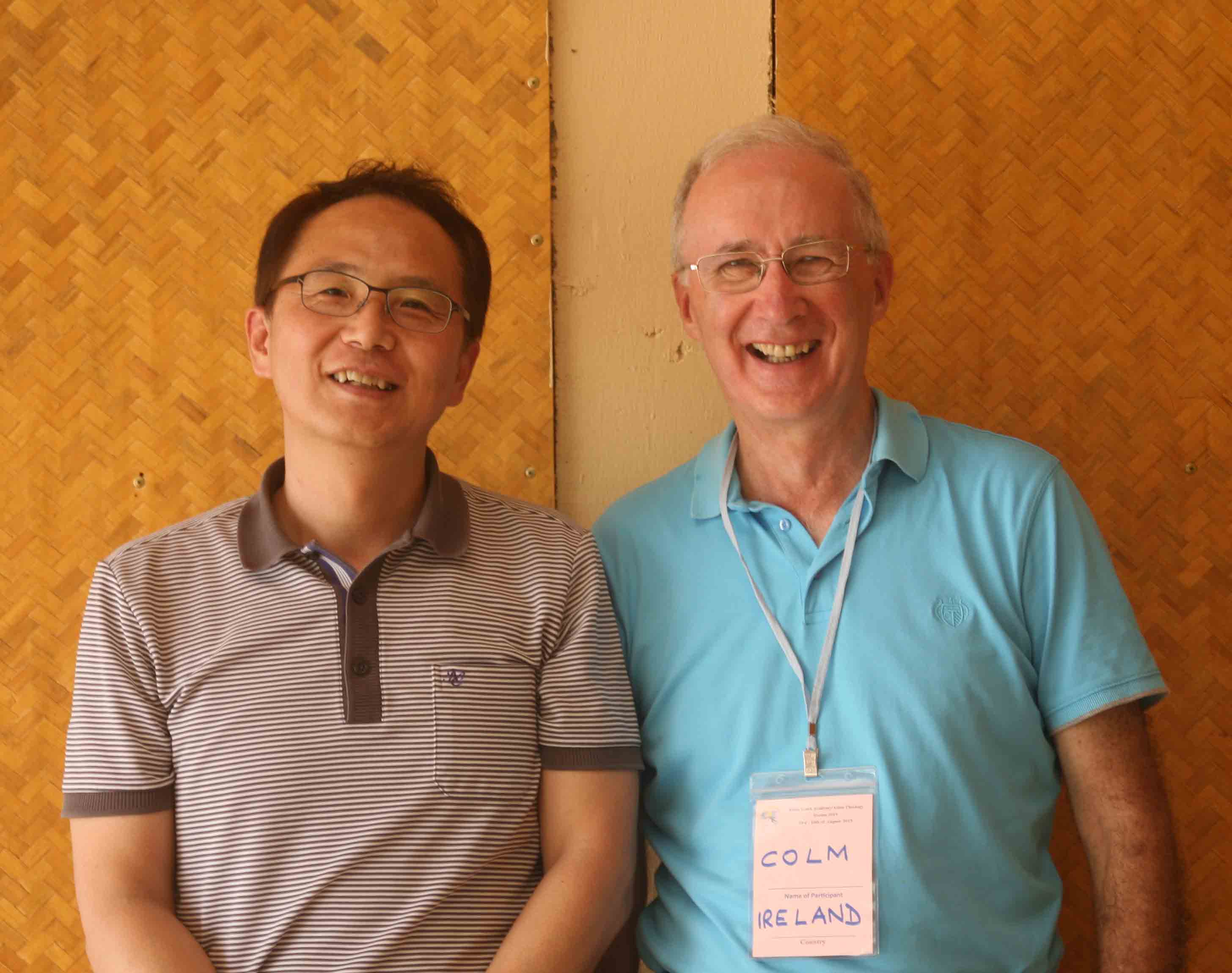